China’s ambassador to the Netherlands, Mr. Zhang Jun, has sent a letter to Amsterdam Mayor Job Cohen, in which he asks for extra protection for tourists from China.

In recent months there has been an increase in street robberies in which Chinese tourists have been targeted. 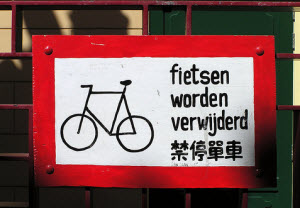 Sign on the fence at the Chinese Buddhist temple on Zeedijk, in Amsterdam’s Chinese district: “Bikes will be removed.”
© Copyright DutchAmsterdam.nl. Want to use this photo?

Groups of Chinese tourists tend to fly to DÃ¼sseldorf or Cologne in Germany. They then take one-day bus trips to Amsterdam. A popular destination is diamond center Gazan, followed by a meal at a nearby Chinese restaurant.

In recent months, a reported 25 Chinese visitors have fallen victim to robbers within the short distance from Gazan to the restaurant.

John Lee, secretary of the Chinese Ondernemingsvereniging Amsterdam (Chinese Entrepreneurs Association Amsterdam) explains that many Chinese tourists do not yet have credit cards, and therefore often carry large amounts of cash. Criminals know this, and Lee says that by now some tourists have been robbed of very large sums of money, “almost always by young men who after the robbery flee by scooter.”

Exacerbating the problem is the fact that since most of the Chinese visitors are on a tight schedule, leaving the same day, those who are robbed do not take the time to report the robbery to the local police.

In response to the Ambassador’s letter a task force has been formed by the City of Amsterdam, the police, the Chinese tourist bureau and the Chinese Entrepreneurs Association.

Extra surveillance is carried out in the neighborhood surrounding the diamond center, and tourists are warned against pickpockets and handbag thieves.

However, due to the increase in surveillance the problem has relocated to the Chinese district itself, where Chinese Amsterdam locals have also been targeted by street robbers.