AMSTERDAM — For years, W.B. Kranendonk was a lone ranger in Dutch politics — the editor of an orthodox Christian newspaper in a nation that has legalized prostitution, euthanasia, abortion and same-sex marriage and allows the personal use of marijuana.

Today, with an orthodox Christian political party in the government for the first time, and with immigration anxieties fueling a national search for identity, the country that has been the world’s most socially liberal political laboratory is rethinking its anything-goes policies. 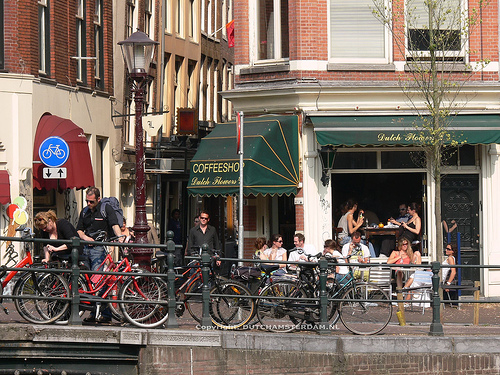 And suddenly, Kranendonk no longer seems so all alone.

“People in high political circles are saying it can’t be good to have a society so liberal that everything is allowed,” said Kranendonk, editor of Reformist Daily and an increasingly influential voice that resonates in the shifting mainstream of Dutch public opinion. “People are saying we should have values; people are asking for more and more rules in society.”

In cities across the Netherlands, mayors and town councils are closing down shops where marijuana is sold, rolled and smoked. Municipalities are shuttering the brothels where prostitutes have been allowed to ply their trade legally. Parliament is considering a ban on the sale of hallucinogenic “magic mushrooms.” Orthodox Christian members of parliament have introduced a bill that would allow civil officials with moral objections to refuse to perform gay marriages. And Dutch authorities are trying to curtail the activities of an abortion rights group that assists women in neighboring countries where abortions are illegal.

The effort to rein in the Netherlands’ famed social liberties is not limited to the small, newly empowered Christian Union party, which holds two of the 16 ministries in the coalition government formed this year. Increasingly, politicians from the more center-left Labor Party are among the most outspoken proponents of closing some brothels and marijuana shops — known here as “coffee shops.”

“Has the Netherlands changed? Yes,” said Frank de Wolf, a Labor Party member of the Amsterdam City Council. “There is not only a different mood among our people and politicians, but there are different problems now.”

The Netherlands is going through the same racial, ethnic and religious metamorphosis as the rest of Western Europe: Large influxes of black, Arab and Muslim immigrants are changing the social complexion of an overwhelmingly white, Christian nation struggling with its loss of homogeneity.

But here those anxieties are exacerbated by alarm over the international crime organizations that have infiltrated the country’s prostitution and drug trades, the increasing prevalence of trafficking in women and children across its borders, and dismay over the Netherlands’ image as an international tourist destination for drugs and sexual debauchery.

“There is an uneasiness about globalization that the Dutch don’t have control over their own country anymore,” said James C. Kennedy, professor of contemporary history at the Free University of Amsterdam. “There is a more conservative mood in the country that is interested in setting limits and making sure things don’t get out of hand.”

De Wolf, the Amsterdam councilman, is part of that movement.

“In the past, we looked at legal prostitution as a women’s liberation issue; now it’s looked at as exploitation of women and should be stopped,” said de Wolf, sitting in the offices of the medical complex where he works as an HIV-AIDS researcher.

He said Amsterdam’s police force is overwhelmed and ill-equipped to fight the sophisticated foreign organized crime networks operating in the city. Laws designed to regulate prostitution and brothel operators have instead opened the trade to criminal gangs, according to de Wolf and other city officials.

And de Wolf said he is fed up with the planeloads of British thrill-seekers who take cheap flights to Amsterdam each Friday evening for weekend binges of sex, drugs and alcohol in his city’s red-light district, where scantily clad prostitutes stand behind plate-glass windows beckoning to potential customers.

“Amsterdam has a reputation that you can do everything here,” de Wolf said. “That’s not the way I want people to look at Amsterdam.”

Those same concerns have prompted some cities to bar tourists from their marijuana and hashish shops. Some localities now require patrons of the shops to show Dutch identity cards to gain entry, and a new nationwide law forbids the sale of alcohol in shops that sell pot and hash. Some lawmakers have proposed requiring the shops to warn their customers about the dangers of cannabis, mimicking the warning labels on tobacco and alcohol products.

Ivo Opstelten, the mayor of Rotterdam, the second-largest Dutch city, announced this month that he will close all marijuana shops within 250 yards of a school — nearly half of the city’s 62 shops.

“We want to discourage the use of drugs among young people,” said Opstelten, a member of the Labor Party. “Studies show soft drugs are detrimental to their health and brain development.”

Michael Veling, 52, proprietor of an Amsterdam coffee shop where a marijuana joint sells for $5.50, said politicians increasingly are looking for any excuse to scale back the sale of soft drugs.

“This toleration policy goes back 35 years,” said Veling, snapping the lids off plastic boxes of pungent marijuana blends marked Neville’s Haze and White Widow. “Now the word ‘coffee shop’ has become a symbol of something we don’t like about society.”

But historian Kennedy describes the attitude as a national “weariness with moral squalor — the Dutch have grown tired of it and unwilling to put up with it.”

He said the rise of the orthodox Christian Union party, many members of which shun television as part of their strict religious code, has coincided with the changing public attitude. 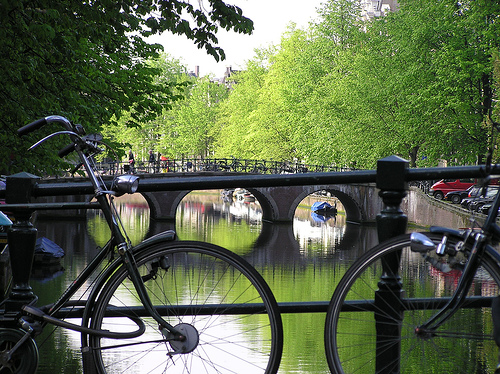 Amsterdam: Canals and Bikes
© Copyright DutchAmsterdam.nl.
Want to use this photo?

Defense Minister Eimert van Middelkoop is a member of the Christian Union. He refuses to work Sundays and recently declined an invitation to participate in the U.S. Embassy’s Memorial Day commemoration because it was held on the Sabbath, officials said.

Leaders of the Christian Union say they are not pushing to banish legalized prostitution or soft drugs. And no officials are discussing rollbacks on same-sex marriage, euthanasia or abortion, even though the party opposes all three.

Instead, the party and other leaders who agree with some of its stances are “copying from the United States,” according to Rebecca Gomperts, founder of Women on Waves, an organization that provides Internet counseling on abortions and charters ships to provide off-shore abortion advice to women in European countries that do not allow abortions.

“They are chopping away at the edges so that people don’t notice,” Gomperts said, “resetting the norm of what is accepted practice.”

Editor Kranendonk said his Christian Union party is realistic: “When you’re a small party, you can’t change everything in four years.

“If you had said to me in 1995 that one of the main orthodox Christian parties would be in the government today, I wouldn’t have believed it,” Kranendonk said. “The number of Christians is diminishing, churches are closing.”

He paused and smiled, “But there are other ways of believing.”
– Source: Molly Moore, Changing Patterns in Social Fabric Test Netherlands’ Liberal Identity, Washington Post, June 23, 2007