DutchAmsterdam.nl — The City of Amsterdam is considering a ban on demonstrations in the immediate vicinity of the National Monument on Dam Square.

The National Monument commemorates those who have fallen during the Second World War and celebrates freedom. 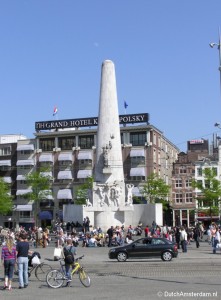 Reason for the possible ban is a manifestation held last week by Sharia4Holland, a group of Muslim extremists that denounce democracy and desire a return to the dark ages by promoting the imposition of sharia — Islamic law — in the Netherlands.

During the event — held right in front of the National Monument — members of the small group insulted the Dutch, railed against Dutch freedoms, and issued a threat against Dutch anti-Islam MP Geert Wilders.

The group’s spokesman, who referred to the murder of Dutch film maker Theo van Gogh by a Muslim terrorist, was picked up by police last Saturday in relation to that threat. He was later released, but he must appear before a judge next month.

Members of a related group, Sharia4Belgium, last January traveled to Amsterdam to disrupt a meeting that featured Irshad Manji, a Muslim reformist and feminist.

That group’s spokesperson, Fouad Belkacem, was said to be scheduled to visit Amsterdam to attend a ‘conference’ about sharia. However, he chose not to travel to Holland after Ivo Opstelten, the Dutch Minister of Security and Justice, suggested he might be picked up and extradicted to Morocco where he is wanted in connection to drug trade. Belgium has thus far refused to extradite him.

The ‘hate beards’ — as local newspaper De Telegraaf refers to the handful of extremists — were joined by Anjem Choudary, a rabid Muslim hate preacher from England.

In England Choudary — who among other nutty things has referred to the 9/11 terrorists as “magnificent martyrs” — led Islam4UK until the group was proscribed under the UK’s Counter terrorism laws on 14 January 2010.

Of nine British Muslims convicted at the beginning of this year on terrorism charges, six were pupils of Choudary.

The vast majority of Muslims want nothing to do with Choudary and his ilk. In January, 2010 Dr. Waqar Azmi, OBE, of the British Muslim Forum was quoted as saying “Islam4UK and its leader Anjem Choudary do not represent or speak for Islam or British Muslims but are a “platform” for the extremist movement al-Muhajiroun. There is no room for such kind of people or their organisations in our community or the peaceful religion of Islam.”

In a letter to the city council Amsterdam Mayor Eberhard van der Laan calls it ironic ‘that the National Monument on the Dam, a symbol for the victims of oppression, for freedom and for those who have stood up for justice, is used for such an event.’

The Municipality of Amsterdam, the Police and the Justice Department are of the opinion that ‘a manifestation that can lead to disorder is incompatible with the dignity of the monument.’

Note: should you be interested in the raw sewage produced by the ‘hate beards,’ this YouTube video will tell you everything you need to know.

An Amsterdammer last updated this post on Wednesday, March 20, 2013, at 9:13 AM CET (Central European Time)