DutchAmsterdam.nl — This Wednesday the historic tower at Muntplein in Amsterdam will sport a huge condom.

The unveiling of the mega-condom marks the start of World Aids Day, organized by Stop Aids Now! 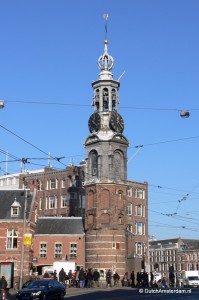 The 35-meters tall tower will not actually be covered with any material. Instead, the condom will be unrolled along the tower with a light projection show.

Actors of the youth TV series Spangas will hand out signed condoms as well as red Aids ribbons.

The light show starts at 5:30 pm, and the projected condom will be visible until the end of December 1 (in the morning and evening).

Stop Aids Now says that on Wednesday it will also publish a shocking report on the need for education among young people in Africa.

The campaign also features posters at bus stops nationwide. The posters depict African youth, along with texts such as, “Ayanna does not know how to prevent AIDS. But you do.”

TV and online ad spots also carry the message that education can save lives.

The unfurling as reported by Dutch public TV

Originally the tower, Munttoren (literally, Mint Tower), was part of of the Regulierspoort — one of the main gates in the defense wall around medieval Amsterdam.

Built in the years 1480-1487, the gate consisted of two towers and a guard house. In 1618 much of the gate was destroyed in a fire that left only the guardhouse and part of the western tower standing.

After the city’s expansion, in 1585, the gate and defense wall had already lost its function, and it was decided to only rebuilt the Western tower.

An Amsterdammer last updated this post on Friday, December 2, 2011, at 11:16 AM CET (Central European Time)