The Roof of the Old Church: “The Garden Which is Nearest to God”

Table of Contents hide
1 The Roof of the Old Church: “The Garden Which is Nearest to God”
2 Defacing Amsterdam’s Old Church, one art project at a time
3 The Oude Kerk Controversy
4 How to get to Oude Kerk (Old Church)

If you visited Amsterdam during the summer of 2015 you had a fantastic opportunity to bring home some unique, panoramic photos of the city.

But in order to do so you had to ascend a challenging set of stairs to a temporary terrace on top of the Oude Kerk (literally, Old Church) in the Red Light District.

It was quite a climb, but you were rewarded with panoramic views across the entire city.

A view across the rooftops of Amsterdam — from the former stock market on the left to the Basilica of St. Nicholas across from Amsterdam Central Station.

The platform is an art installation.

Officially titled, “The Garden Which is Nearest to God,” the project is the work of Japanese artist Taturo Atzu (formerly known as Tatzu Nishi, Tatsuro Bashin, Tazro Niscino, and TatzuOozu).

He specializes in ‘art’ that allows people to access areas normally closed to the public — in this case to one of the largest roof surfaces in Europe, which graces the oldest building in Amsterdam. 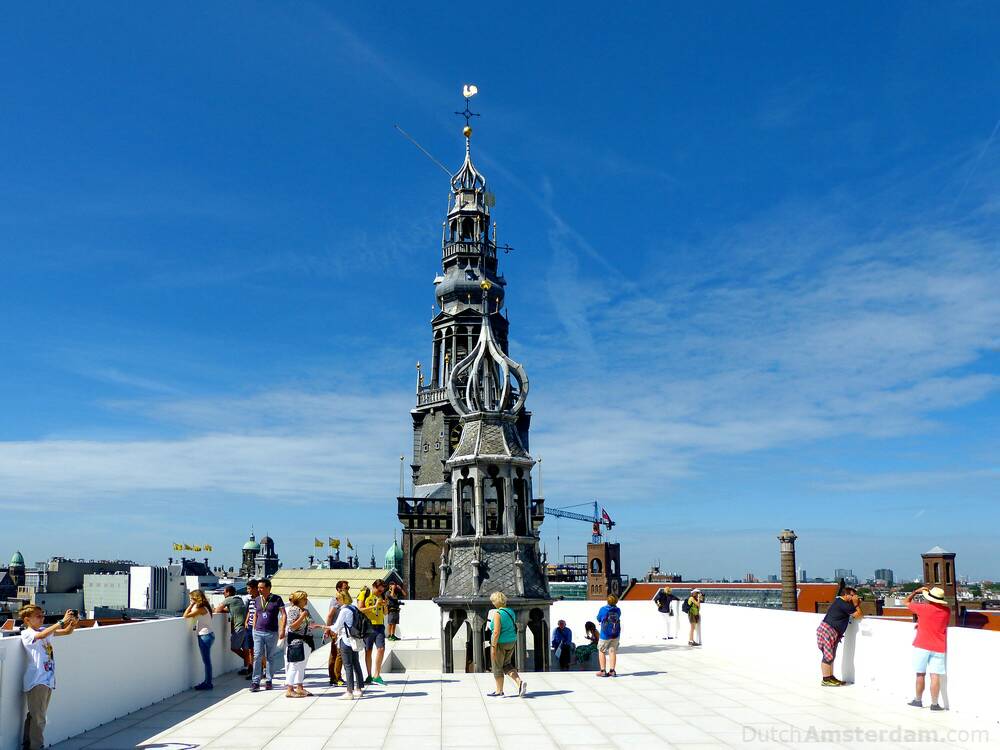 Taturo Atzu’s panorama terrace atop the Old Church in Amsterdam

Defacing Amsterdam’s Old Church, one art project at a time

Defacing a beautiful, 800-year old building like the Oude Kerk with construction scaffolding and a rather minimalist (dare I say ugly? yes!) observation platform isn’t my idea of art either.

In fact, this is the kind of surrealistic art I dislike with a passion. (Not only that, but the private organization that operates the Old Church has become notorious for hosting art installations that damage the beautiful building in various ways).

But there I was, on a beautiful summer day. I had just discovered that my favorite chocolate supplier, Puccini Bomboni, had closed its shop in a lean-to at the Old Church.1

So I had a fantastic espresso at Quartier Putain, just around the corner. (If you know French, you’ll appreciate just how appropriate the name is for a business located in this area). 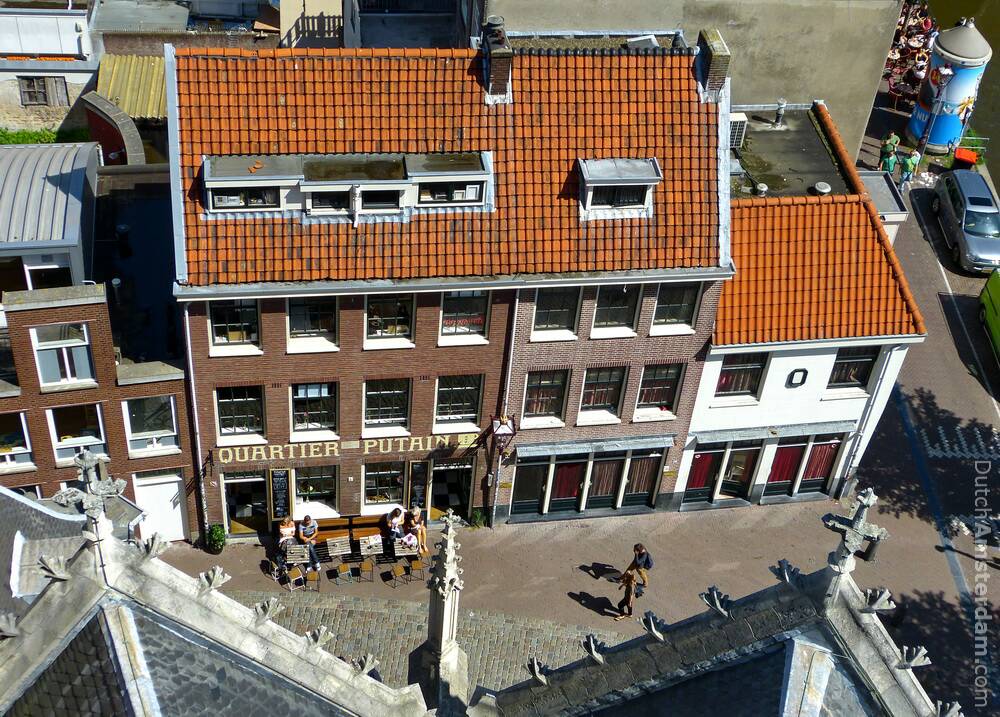 Looking up at the church, I could see the ugly terrace. On a whim I decided to go and take a different look at the neighborhood where, in the 1970s, I lived and worked for five years.

The scaffolding stairs were at the corner closest to the bridge across the Oudezijds Voorbugwal canal, but the admission tickets were sold at the entrance to the church, about 30 meters further.

“Do you know where to start climbing?” the lady at the register asked while handing me my ticket. 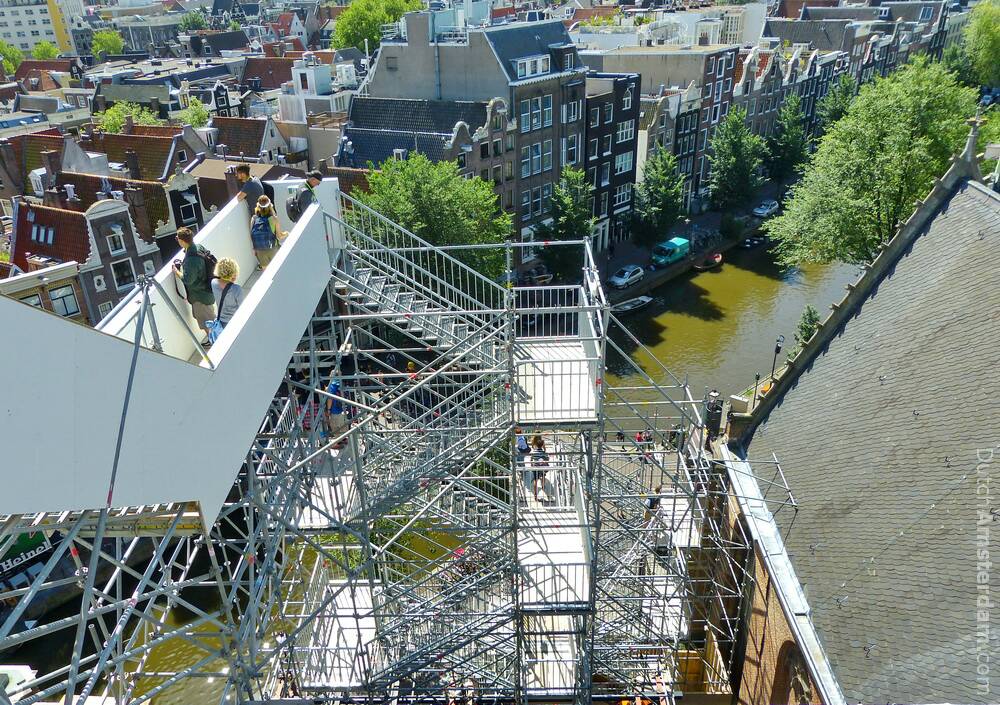 You’re in for quite a climb, but the views are worth the effort 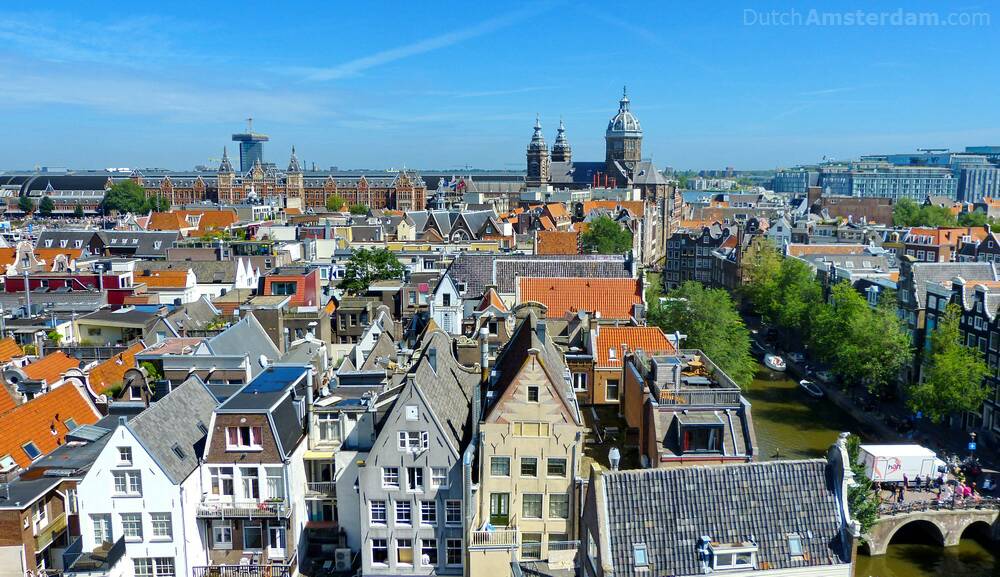 Looking across the Red Light District to Amsterdam Central Station 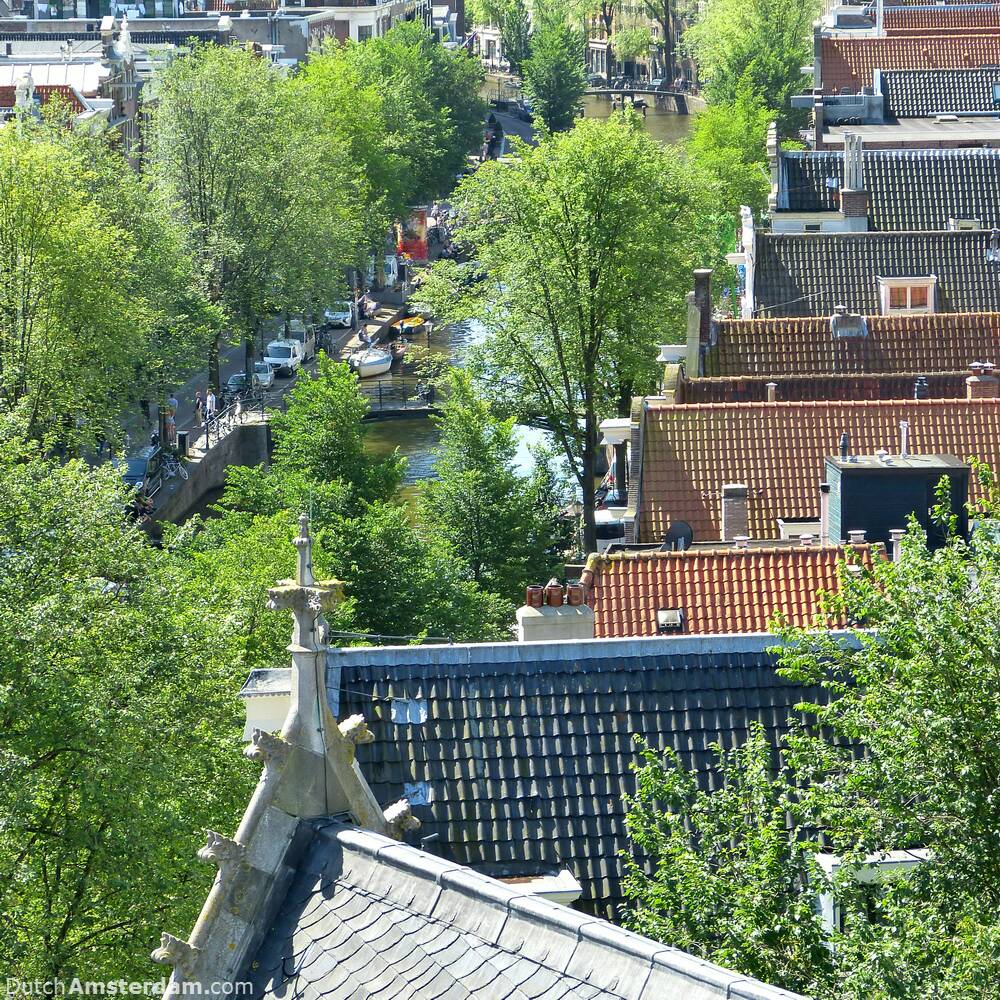 A rooftop view of Oudezijds Voorburgwal. 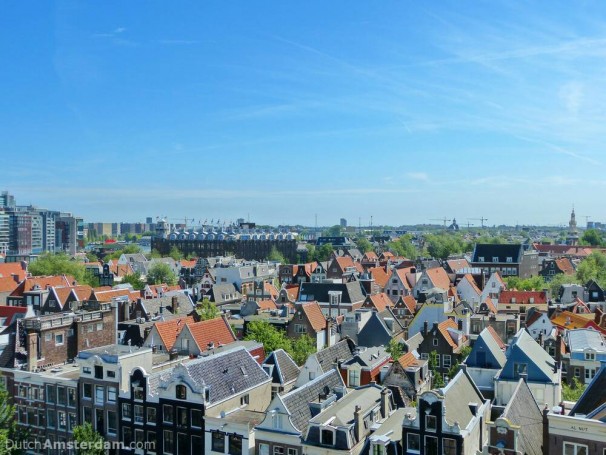 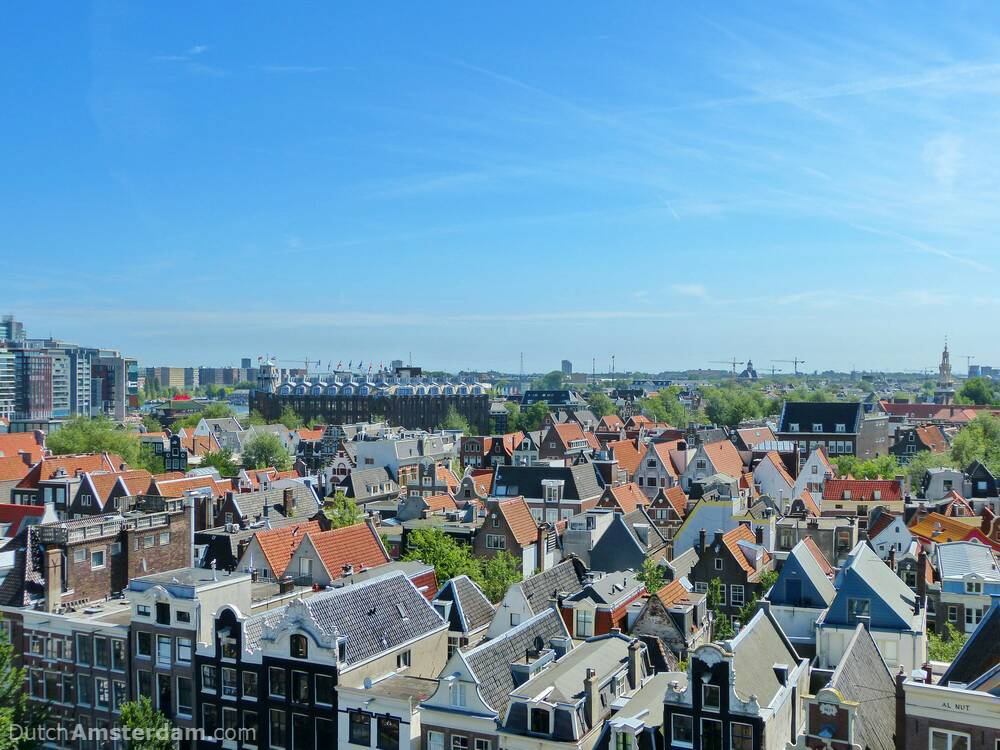 When I still lived and worked here, at a Christian Youth Hostel, the Red Light District was still very much controlled by all manner of small- and big time crooks. Police did not really have a grip on the situation.

There were lots of street fights, and a lot of crime — not to mention the fact that the area was overrun by drug dealers and junkies.

In the summer of 2007 this area of town the focus of an intensive clean-up plan titled Project 1012, after the postal code for the center of Amsterdam.

The project was controversial for reasons I won’t go into right now. (In 2018 the city council’s audit office said Project 1012 had largely failed. Among other things, it was too ambitious and unrealistic.)

I will mention this, though: compared to the mid-Seventies, this famous/infamous district currently looks and ‘feels’ a lot more like Disneyland, rather than the ‘seedy’ area some travel writers tend to describe.

Meanwhile, the Oude Kerk is run by private organization that has, in the years following Taturo Atzu’s ‘Garden that is nearest to God, treated the Old Church in increasingly controversial ways. Many Amsterdammers believe the city’s oldest monumental building is being destroyed by the organization. Keep that in mind if you want to see one of the art installations hosted here.

How to get to Oude Kerk (Old Church)

Looking for something to eat or drink around here? Check out nearby Nieuwmarkt, with its many pubs and eateries.