DutchAmsterdam.nl — Once in every five years Amsterdam harbor — one of Europe’s busiest ports — become the backdrop for one of the largest maritime manifestations in the world: SAIL

For five days, from August 19th through August 23rd, the river IJ (pronounced somewhat like eye) behind Amsterdam’s Central Station will be filled with music, culture and some 600 boats, including many historic vessels and a huge number of impressive tall ships from all over the world.

This is an archived article. The next SAIL Amsterdam event takes place from August 12 through August 16, 2020.

Details will be posted here well ahead of time.

August 19: Sail-In Parade
One of the most popular events during SAIL is the festive boat parade in which hundreds of ships will sail the Noordzeekanaal (Northsea Canal) from the seaport town of IJmuiden to Amsterdam. The parade, which lasts from 10:00 am through 3:00 pm, is led by the magnificent fleet of tall ships.

Find a place anywhere on the North or Southside of the IJ, but note that the best spots will be taken up hours before the parade begins. 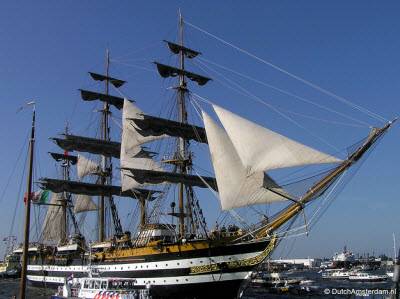 For the first time at SAIL, there will also be various short performances on the decks of some tall ships.

Daily: Fireworks
Each night at 10:15 (10:00 on Saturday) all eyes turn to the sky above the IJ for a fifteen-minutes fireworks show. 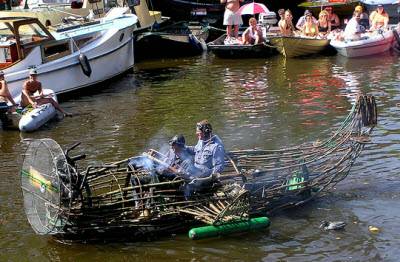 Winner of the 2005 Pieremachochel parade [View larger]
© Copyright DutchAmsterdam.nl. Want to use this photo?

Originally the term pieremachochel indicated a small rowing boat. Later it was used of small boats that were in a poor state of repair, or that otherwise looked like they were not fit for sailing.

Later still the term also referred to impromptu, homemade vessel which — more often than not — were created out of something that was originally not intended to be used as part of a boat. Previous piermemachochel parades have included anything from bathtubs to a raft powered by a Harley Davidson.

This parade, which takes place during every SAIL, is one the funniest events to witness in Amsterdam. It will takes place from 1:00 pm through 4:00 pm on the canal route that runs via Westerdok, via the Korte Prinsengracht, the Prinsengracht and the Plantage Muidergracht to Enterpotdok.

Arrive early for the best spots.

Note: while the City of Amsterdam is hard at work trying to attact tourists, this map — found on the English-language website of SAIL 2010 — includes information in Dutch only. (We’re speechless, and not for the first time either…).

The map shows Amsterdam Central Station on the left. You can either walk through Central Station, or take the suggested route past the St. Nicholas Church.