There are a number of ways to describe the service in Amsterdam stores and other businesses, but we can’t actually print any of them here for fear of upsetting our more sensitive visitors.

So we’ll start with the good news: Until you have visited Amsterdam, it is quite likely that you have taken service at home for granted. That will change just as soon as you have had your first experience with Amsterdam-style poor service.

Mind you, we hasten to say that your are far more likely to encounter wonderful, friendly people, who will go out of their way to serve you to the best of their abilities.

For instance, more often than not you will be addressed in the language of your choice. Really, don’t bother to carry those pocket guides to the Dutch language, because a) we’ll answer in English, French, German or Spanish anyway, and b) we’re too busy to try and understand your unique rendition of the phonetic representations of quaint Dutch phrases that were in vogue when the book was first published — 2 years after the invention of the printing press.)

At Central Station the other day I noticed someone ask a train conductor for directions to the glass-topped tour boats that crowd the Amsterdam canals. Not only did the employee answer with clear directions (in French), but he also provided lots of extra information including tips on which tour boats companies to avoid, and which ones offered — in his opinion — the best value for the money. This even though providing any such information is not part of his duties.

It should also be noticed that some things tourists may interpret as rude, can actually be explained as cultural differences.

That said, the employees — along with some managers and business owners — in a good many stores in Amsterdam do not take kindly to those who interrupt their day. It would be funny — in a weird way — if they’d simply act like extras in John Cleese’s “How to Irritate People.” But they act far worse, to the point of being really truly rude.

Tourist needs new batteries for their camera. Employee behind the counter of a major drugstore is entirely unhelpful and clearly upset when they ask for help in deciding which batteries to get. After all, they interrupted her while she was sharing details of a friend’s love life with a co-worker. Instead of helping, she simply keeps pointing at the batteries display. When a manager shows up he hopefully turns to her, but she stops him short by saying, “I can’t help you. I am on my way to lunch.” 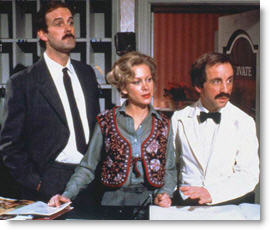 Example related by a British friend who has lived in Amsterdam for the past 6 years:

Young woman buys a couple of tops and a skirt at a small boutique. She asks the woman behind the counter whether she could have a larger bag than the one she selected. Woman drops her shoulders, sighs heavily, yanks the smaller bag away and slams a larger one on the counter, saying, “Here.” Customer is left to bag her purchases while the woman, smiling friendly, greets another customer.

Another example, as recently observed:

A bus is sitting at its stop at Central Station. Passengers have boarded but the door is still open. Tourist asks the bus driver, “Which bus should I take to the Anne Frank House?” Bus driver answers, in Dutch, “Weet ik veel! Ik ben geen toeristengids.” (What do I know?! I am not a tourist guide.)

Related by a DutchAmsterdam.nl visitor:

British tourist enters small tobacco store, wanting to buy a Zippo lighter he saw in a window display case. The store owners shows him a box with several Zippo lighters, but the one the customer wanted is not amongst them. When he says so, the store owner answers, in a rude tone of voice, “Graag of niet” (With pleasure or not at all), quickly removes the box of lighters and orders the tourist to wait while he first helps some other customers who had just walked in. No sale.

While dining at a restaurant you ask the waiter for a glass of plain tap water. He refuses, and says you are welcome to order water from the menu. The choice is either the non-carbonated Spa Blauw (Blue), or the carbonated Spa Rood (Red) — roughly at the price of a gallon of gasoline. While some will admire the fact that this makes perfect sense from a business point of view, it’s still a shame — especially since Amsterdam’s drinking water is some of the best tasting in Europe, if not the world.

The Not Bad At All

Come we now to differences in culture. Some local habits that would be viewed as poor service at home, aren’t seen as such over here.

Family of Tourists enters brown café, orders and receives drinks, and thereafter are seemingly ignored by the waitress. Poor service? No. Rude? No.

In this case, the visitors are experiencing Dutch hospitality. The Dutch see brown cafés as extension of their living rooms. They go there to relax, and in all but a few such places that means you can nurse your drink for hours while shooting the breeze, reading newspapers, lovingly stroking the cat, or catching up on your email. See How To Visit An Amsterdam Café.

For the same reason many restaurants won’t rush to present you with a bill after you have finished your meal. You’re not being ignored. Rather, you are given time to relax. (Then again, if there are only a few other diners, you may serve as window dressing.)

At the same time, one must realize that the Dutch are very direct in their speech. We say what we mean and mean what we say — a quality seen as ‘rude’ by some, and ‘refreshingly, albeit brutally, honest.’ We’ll let you know exactly what we think of George Bush (a man most of us would like to see delivered to the International Criminal Court in The Hague), tell you that dress does indeed make you look fat, and won’t ask “how are you?” if we don’t really want you to tell us in detail.