© DutchAmsterdam.nl — Twentysix coffeeshops in downtown Amsterdam must close their doors within three to six years.

So says the final version of a plan developed by Coalition Project 1012 as presented to the Amsterdam town council.

The vast majority of coffeeshops that will close down are located in and around the Red Light District. After September 2009, owners of these establishments will get a one-time 3-year extension of their current operating license. 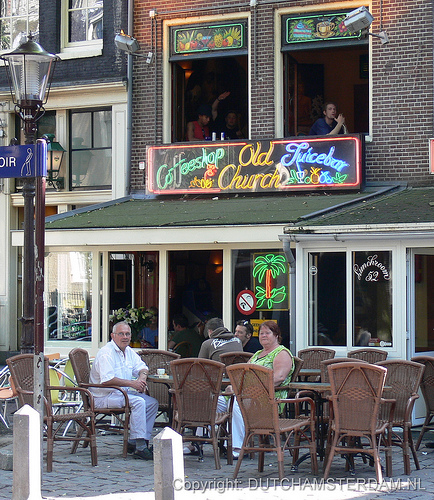 Coffeeshop Juicebar Old Church, across from the Old Church in Amsterdam’s red Light district
© Copyright DutchAmsterdam.nl. Want to use this photo?

According to the Municipality of Amsterdam the large number of coffeeshops in the center of town create an infrastructure that encourages criminality.

The City refers to such establishments as ‘crimogene‘ — a term used to describe functions that encourage ‘promotion or advancement of — or susceptibility to — criminality.’

For instance, while coffeeshops are licensed to legally sell soft drugs, it is technically illegal for them to buy their stock.

Tighter rules, new laws and increased police vigilance made it much more difficult for small-time growers to operate; a situation that has allowed organized crime to muscle in on the supply chain.

Coalition Project 1012 — named after the postal code covering Amsterdam’s city center — is designed to clean up ‘the entrance to the city’ and to take back control over the area from what one alderman referred to as ‘riff-raff.’

The project is Amsterdam’s response to an official report that documented the growing power and influence of organized crime over downtown Amsterdam.

In 1997 the city appointed a Red Light District manager charged with the development of a methodology for the administrative approach to organized crime. In 2000 this resulted in the formation of the Van Traa Project. This project takes a multi-agency approach in which police, the public prosecutors deparment, tax authorities — but also housing corporations and private real estate agencies partner in an integrated approach to maintaining law and order.

The Van Traa Project is headed by a small team — the Van Traa Team — which coordinates all activities. The team consists of a team manager, legal advisers, and information specialists.

Among other things, the Van Traa Team implements the BIBOB act, which allows municipalities to screen companies and individuals who apply or re-apply for business licenses. The screening is intended to determine whether or not the individual or business has any connections with organized crime. If and when such connections are found, the municipality has legal grounds on which to deny or withdraw business permits.

An official report by the Van Traa Team documented serious problems in the Red Light District and immediate surrounding areas. Those problems ranged from money laundering to human trafficking, and from housing speculation to slavery and other abuses — most of it connected to organized crime.

To a large extend Coalition Project 1012 was established in response to the Van Traa report. The project is intended to break the criminal infrastructure, to diminish the size and and concentration of “crimogene functions”, to stop and combat the general degradation of the area, and to transform the entire area into a high-quality, diverse ‘Red Carpet’ into the city.

Currently Amsterdam has 226 coffeeshops — establishments where one can legally buy and use soft drugs. Of the 141 coffeeshops in the Centrum borough, 76 are located in the 1012 postal code. The latter number will be reduced to 50.

The Coalition Project 1012 plan states the reason for the closures is that the large concentration of coffeeshops in a small area, in combination with many other crimogene functions form an obstacle for the project’s central goal of breaking the underlying criminal infrastructure.

The decision on which coffeeshops will lose their operating licenses is based on two criteria: the project’s overall plan of approach to certain streets, and the need to improve the most dilapidated areas.

Since the coffeeshops are currently licensed as Horeca III or IV businesses, owners can elect to change their establishments into other horeca functions.

The Coalition Project 1012 plan says it wants to make clear it does not consider owners of these coffeeshops to be criminals, or that the establishments are the scene of large-scale criminal activities. At the same time, the plan makes clear why it is necessary to reduce the number of coffeeshops in the area.

Both the people behind the project and the municipality of Amsterdam make clear they do not intend to get rid of all coffeeshops.

That said, another twelve coffeeshops may have to close because they are located too close to schools. Initially it was said as many as 43 coffeeshops had to close down for that reason.