DutchAmsterdam.nl — Amsterdam mayor Eberhard van der Laan has announced that 44 coffeeshops located too close to schools under a new national law may remain open for business until at least the end of 2012.

Next year the city will determine whether the shops must their business elsewhere or can remain where they are.

Coffeeshops are licensed establishments where soft drugs are legally bought and used. They are ‘tolerated’ under a uniquely Dutch concept called ‘gedogen‘ — a term used of a situation or activity that technically is illegal, but which is actively tolerated as a matter of government policy. 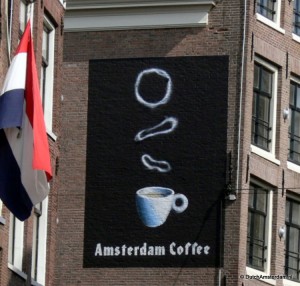 This mural, at Coffeeshop Dampkring in Haarlemmerstraat, Amsterdam, is no longer there.

Under a law passed by the previous Dutch government all so-called coffeeshops located within 250 metres walking distance from a school would have to close down by the end of this year.

Ultra-conservative elements in the current government want to change the distance requirement to 350 meters. If that proposal becomes law 116 of Amsterdam’s 223 coffeeshops will be affected.

Netherlands Statistics, the Dutch national statistics office, last September stated that the 350 meters requirement would affect just 58 coffeeshops in the entire country, including 21 in Amsterdam. The City of Amsterdam disputes those numbers.

The city council, including the mayor, opposes the new law. It fears that closing the shops would drive the trade in soft drugs back to the streets, or cause remaining shops to become extra crowded, causing nuisance problems for local residents.

The mayor, who is trying to negotiate an exemption to the new law, says it is better to educate young people in an effort to prevent the use of drugs than to close coffeeshops.

A spokesperson for the mayor says that incidental research shows students do not buy drugs from coffeeshops, but rather grow cannabis at home or buy marijuana from friends. [1]

The current Dutch government plans to introduce a pass card/membership system for coffeeshops, open only to legal residents of the Netherlands — effectively barring tourists.

Amsterdam’s political leaders are opposed to these plans.

Preview of the DVD, Adventures In Cannabis Hemp “The Dutch Coffeeshop Experience”