Update, Feb. 17, 2011: Amsterdam City council today decided that starting this year Queen’s Day in Amsterdam will finish one hour earlier than in the past.

The city rulers hope the new rule will make it easier for the National Railways and other public transport companies to transports the huge crowds back home.

DutchAmsterdam.nl — Downtown Amsterdam has reached its full capacity with 800.000 people visiting the annual Queen’s Day celebrations. Up to 600.000 people gather in the city’s Centre.

On Monday Amsterdam mayor Eberhard van der Laan is going to meet with colleagues from other cities and towns in the region to see whether they could organize alternative high-quality events that would encourage revellers to visit such places as Zaanstad, Purmerend, Alkmaar, Hoorn, Enkhuizen en Haarlem instead of Amsterdam 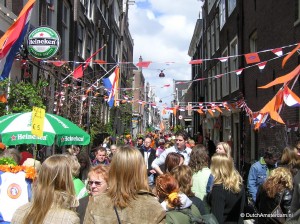 Throngs fill the streets of Amsterdam during Queen's Day
© Copyright DutchAmsterdam.nl. Want to use this photo?

In coming years the municipality also plans to spread events over the rest of Amsterdam, whereas currently they are focused mainly in the center of town.

Billed as the world’s biggest street party, Queen’s Day is the annual Dutch national holiday in honour of the late Queen Juliana’s birthday.

It is celebrated throughout the Netherlands on April 30, but each year hundreds of thousands of people travel to Amsterdam.

They are drawn by — among other things — the city’s festive atmosphere, a city-wide ‘yard sale,’ a day-long canal parade, and a variety of top music- and dance events.

Foreigners have discovered the event as well (wisely booking a hotel well ahead of time).

“It’s certainly not the case that people are not welcome in Amsterdam,” says a spokesman. “But in terms of capacity the center of town is unable to handle many more extra people.”

On Queen’s Day a big part of the problem is the ability to transport the huge crowd back home in an orderly fashion at the end of the day. The Netherlands Railway Service (NS) can process about 50.000 people an hour via Central Station. 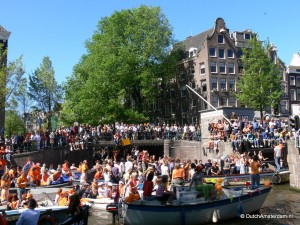 Many people take to Amsterdam's canals on Queen's Day
© Copyright DutchAmsterdam.nl. Want to use this photo?

During most of the day there is no public transport in the city’s center. There is no car traffic either since people throng the streets shoulder the shoulder. A walk that would normally take less than 10 minutes — for instance from Central Station to Dam Square — on Queen’s Day may take up to an hour.

The municipality has also expressed some concern about alcohol- and drugs use among a growing segment of partygoers, and it notes the poor accessibility of parts of the city for emergency services.

That said there have no major emergencies during Queen’s Day celebrations in Amsterdam. Part of that is no doubt due to the fact that during this day cafés, and bars are allowed to sell only so-called ‘evenementenbier‘ (Events Beer) — which has a lower than usual percentage of alcohol.

In addition over the past few years Amsterdam has maintained a rule that allows people to carry no more than one can or plastic glass of beer per person during the event.

This year the mayor has also requested that supermarkets observe that rule as well by selling each customer no more than one can of beer.

Last December Van der Laan suggested that some events should end one hour earlier than usual in order to facilitate a more orderly exodus from the city.

All outdoor events would have to stop at 8 pm, and the big music event at Museumplein would have to end by 9 pm instead of at 10 o’clock.

However, a number of council members have opposed such plans, which they consider to be insufficiently substantiated.

Meanwhile the mayor’s spokesperson points out that this year Queen’s Day takes place on a Saturday. “If the weather is nice that day we could easily expect more than 1 million people.”