Home > News > Suggestion: Park your bicycle above a canal

DutchAmsterdam.com — Would you park your bike above a canal?

If it were up to Pascal van den Noort, of the bicycle lobby organizaion Vélo Mondial, you’d be doing just that — at least near the Leidseplein (red marker on the map).

The city is fighting an uphill battle against a tsunami of bicycles and scooters parked outside official facilities at the popular square.

Van den Noort’s idea is to build a bicycle parking structure above the water of the canal at Zieseniskade (the yellow marker on the map). 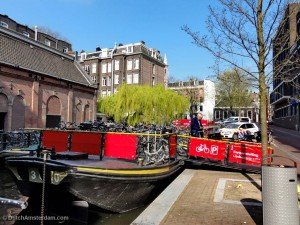 Temporary bike parking facility on a pontoon at De Melkweg

Another above-water facility would be built in front of cultural center De Melkway (‘The Milkyway,’ the purple marker).

Recently the city scrapped plans for an underground bike parking facility at Raamplein (green marker) because it would end up costing nearly 30 million Euro.

Van den Noort, who presented his plans to the Centrum Borough and a handful of city council members today, says his solution will provide 3800 parking spaces at a cost of about 6 million Euro.

Under the proposal the structure would include lots of greenery. 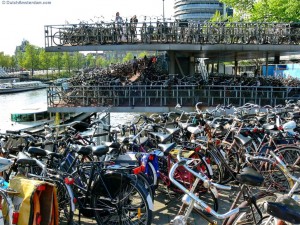 Parking bikes above the water is not a new idea. At Central Station a guarded, three-story bicycle parking facility has been in operation since April, 2001.

Initially it was meant as a temporary solution, scheduled to be closed in 2004 — later postponed to 2009.

Over the years it has become a tourist attraction — one of the most filmed and photographed spots in Amsterdam.

Meanwhile, if you park your bike at or near Leidseplein outside the designated areas, it stands of good chance of being removed.

Here’s all the hassle you’ll have to go through to get it back.

An Amsterdammer last updated this post on Thursday, January 17, 2013, at 0:55 AM CET (Central European Time)