Dutch Amsterdam — Brothels in Amsterdam are going to guard more strictly against human trafficking and other abuses.

Members of SOR, an industry foundation for operators of so-called ‘window brothels,’ have agreed to set up a code of conduct.

Some 60 percent of brothels in Amsterdam is affiliated with SOR.

The window operators want to assist Police and the Justice Department in banning forced prostitution and other illegal activities. They have agreed to report any suspicion of illegal acts to the police.

The SOR says that by adopting its code of conduct it accepts a measure of responsibility — something the city of Amsterdam has been calling for.

Amsterdam’s Red Light District has come under closer scrutiny in recent years. It is one of the focus areas for Project 1012 — a large-scale effort to spruce up downtown Amsterdam. 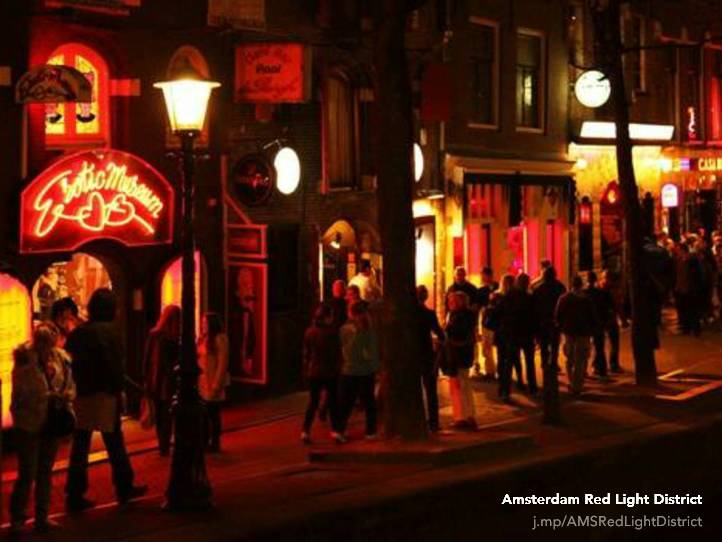 Though it has long been a major tourist attraction, Amsterdam’s Red Light District has also been referred to as ‘a square mile of misery.’ Not all women who work here do so voluntarily.

At the end of the 19th century this area of the city was referred to as ‘Dark Amsterdam’ — a district where prostitutes and criminals congregated.

In modern times Amsterdam’s Red Light District became one of the city’s unofficial ‘tourist attractions’ — a place where, reportedly (and incorrectly so), “anything goes.”

Even though the city’s cleanup campaign has reduced the number of brothels, limited the number of streets where prostitutes can ply their business, and has disrupted what it referred to as a ‘criminal infrastructure,’ tourists from around the world are still drawn to this area by the droves.

Scantily-clad ladies behind red-lighted windows — and shops that sell books, videos and other products that leave nothing to the imagination — do not prevent entire families, kids of all ages in tow, from cruising the area as if it were a theme park.

At times the streets and alleys are so busy that locals claim you can literally “walk over people’s heads.” Yes, locals. This district is home to many Amsterdammers who have no connection whatsoever with the businesses surrounding them.

However, aid workers — ranging from former prostitutes to religious types, and from social workers to human rights activists — often refer to the Red Light District as “a square mile of misery.”

After all, not all women who work here do so voluntarily. Many are victims of human trafficking, so-called loverboys, or other criminals. Some were kidnapped. Others have been tricked into coming to Amsterdam from abroad. When the promised ‘well-paid chambermaid’ jobs did not pan out, the women — often in the country illegally — were forced into prostitution in order to pay for their trip and their room and board.

There are many good reasons to visit the Rosse Buurt or the Wallen, as the Dutch say: Picturesque canals, and great architecture in one of the oldest parts of the city. Good pubs and fine restaurants (if you know how to find them between the over-supply of forgettable tourist trap cheese shops and fast food hole-in-the-wall eateries).

But if you come here for any other reason, spare a thought for the tragic stories behind the facades.

Prostitution in the Netherlands

Window brothels are a typically Dutch phenomenon. A prostitute rents a window plus workspace from a ‘windows operator’ (Dutch: raamexploitant). This assures — in theory — that the prostitute is more independent. She selects her own customers, and negotiates her own rates and services.

In almost every municipality in the Netherlands where window prostitution exists, operators have formed a cooperative organization.

Network of human traffickers forced women into prostitution in Amsterdam
Panel of customers advises Amsterdam City Council on well-being of prostitutes
The connection between Amsterdam’s coffeeshops and organized crime — One reason the number of coffeeshops in the Red Light District has been greatly reduced: the involvement of organized crime syndicates.