DutchAmsterdam.nl — The city of Amsterdam has promised to review its promotional material in order to cull overly rosy commendations of its Red Light District.

The city is tackling abuses in the area, and actively marketing the ‘red light’ character of the district does not fit that picture.

Amsterdam uses a number of English-language websites to market itself to foreign tourists. The sites actively promotes the Red Light District as well as various businesses that operate walking tours and even a ‘Red Light Window photoshoot’ (“Make a personal photo card with lines like ‘Mom, I have a new job,’ a shocking Christmas card or a playful slideshow to show at your wedding – a great surprise for your in-laws!”) 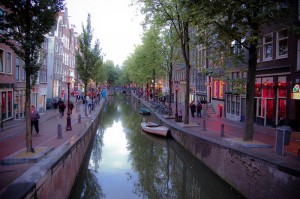 Under the header, “Let’s be honest,” the city’s primary english-language promotional website says this about the Red Light District:

Prostitution has enjoyed a long tradition of tolerance in Amsterdam and, as with soft drugs, the Netherlands’ approach is to legalise the trade and impose regulations. Basically, they know people are going to do it anyway, so they may as well keep it safe for those involved. In addition to preventing forced prostitution, this open and honest approach means sex-workers here have their own union, plenty of police protection, an information centre (for visitors as well), frequent monitoring and testing and professional standards.

“As if everything is peachy keen,” write CDA councilors Marijke Shahsavari and Diederik Boomsma in an opinion article published in Trouw, a Dutch national newspaper.

“It is difficult to come up with text that does more to reassure (falsely) and encourage potential clients than that one,” the Shahsavar and Boomsma write. “By promoting it like that the municipality gives the impression that visiting prostitutes in the Red Light District is harmless, acceptable, regulated and normal.”

Human Trafficking, Slavery and Prostitution in The Netherlands

The councilors refer to a recently published Dutch-language book titled, “Slaven in de Polder” (Slaves in the Polder).

Written by Trouw journalists Martijn Roessingh and Perdiep Ramesar, the book exposes the raw, degrading facts about human trafficking and prostitution in the Netherlands.

The book’s conclusion: lifting the brothel ban eleven years ago has done little to curtail exploitation. Confirming previous studies by the Justice Department and Police the authors report that 50 to 80 percent of women in the sex industry are subjected to financial, emotional or physical coercion.

According to Amsterdam alderman Lodewijk Asscher, politically responsible for the Red Light District, such abuses occur even in the legal window brothels that operate under municipal permits.

In what he terms a “silent collective agreement” Asscher says that many city managers and opinion makers deny the abuses and instead insist that everything is OK.

According to Asscher many people don’t speak out on the issue for fear of being viewed as ‘moralists’ or ‘prudes.’ However, he says that those terms don’t come into play when you’re dealing with human trafficking.

According to Radio Netherlands

He regularly makes comments regarded as ‘un-Dutch’. He believes it is a national misconception that prostitution belongs in the compass of freedom and tolerance. The problems, he says, are grossly underestimated:

“Hard-line criminal behaviour is what is happening behind those windows. Women subjected to extremes of exploitation. They have a non-existent debt they have to pay to a pimp by prostituting themselves. They are physically abused if they don’t work hard enough.”

In 2005, councillor Lodewijk Asscher published a book called Nieuw Amsterdam in which he argued for a policy of discouraging window prostitution and tackling exploitation of women in the city. He has now been an alderman for five years and is an influential politician, often seen as potentially the next leader of the Dutch Labour Party in parliament.

Asscher has worked on problems within the Red Light District for many years already. He is closely involved with Coalition Project 1012.

The project, named after the postal code for downtown Amsterdam — which includes the Red Light District — entails close co-operation between private enterprise, police, the tax authorities and the municipality in order to “spruce up” the city’s “dismal” red carpet.

When it was presented, in 2007, Asscher said, “The days that riff-raff have been allowed to control the most beautiful section of the city’s historic centre are over.”

But a recent report by the Netherlands Court of Audit concluded that it is impossible to determine whether Amsterdam’s efforts to reduce the number of window brothels, coffeeshops and call shops in the city’s Red Light District lead to less crime. It is also not possible to measure whether Amsterdam’s overall approach to clean up the area will lead to the desired result.

In an interview with Trouw, Asscher says that while prostitution is legal, it is not normal. He calls for major additional efforts to combat human trafficking, exploitation, coercion and abuse.

Over the next few weeks the Senate will be debating a new prostitution bill. Proposals include making the minimum age for registered prostitutes 21 instead of 18. Having sex with a prostitute living in the Netherlands illegally would become a criminal offence. It’s now or never, says Lodewijk Asscher. If it can’t be regulated, prostitution will have to be made illegal again.

“This is our last chance. Prostitution has been legal for ten years now. We have to clamp down hard on these abuses. In Sweden, a ban resulted in a reduction in people trafficking. After all, slavery was abolished a long time ago in the Netherlands.”

Eliminating all promotion of the Red Light District is not at issue, says Tessel Schouten, a spokeswoman for Lodewijk Asscher.

“Abuses aside, architecturally and historically it remains a gorgeous area with many old streets, beautiful squares and magnificent facades. Internationally we want to emphasize those attractions. As long as we do so honestly no one could object to that.”