The fire brigade has removed some 20 occupants of four monumental buildings at Vijzelgracht, in Amsterdam center, because their homes had subsided during then night as a direct result of construction work for a new leg of Amsterdam’s subway system.

In June this year, another four buildings at Vijzelgracht were also damaged when a dam alongside the construction area had sprung a leak. This lowered the level of groundwater, causing the ground on which the historic houses were built to become unstable, allowing the houses — considered monuments — to sink several centimeters. 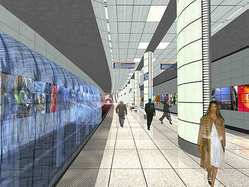 Then, as now, occupants saw cracks appear in their walls, and were unable to open doors and windows.

At the time construction work in that area was stopped while contractors and the city sought for possible solutions to the problem.

Among other things, contractors have inserted support beams underneath the houses. They have also injected grout which, in the process, raised the buildings to a level that makes it possible to start renovation work.

Subway construction activities were resumed only just yesterday, with a spokesman for the ‘North-South line’ project assuring viewers of local TV station AT5 that occupants of the buildings alongside that stretch of the project had nothing to worry about.

Those occupants remained skeptical, and they warned the fire brigade themselves when they noticed cracks appearing in walls.

Many Amsterdammers voted against the new subway line, but the referendum was declared invalid because not enough people voted.

Developers claimed the project would be ready by 2011, at a cost to the City of EUR 300 million. Currently the project is slated to be finished in 2016, at a cost of EU 900 million. While the federal government provided the initial EUR 1.1 billion financing, Amsterdam City itself is fully responsible for any and all extra costs. Naturally that kind of problem never hurts the politicians involved, but rather those affected by reduced subsidies and other forms of cost-cutting elsewhere.

A state-of-the-art measuring system is in place, in which the position of thousands of mirrors attached to buildings are checked by computer with the use of laser beams.

Critics of the project point out that once the system registers a problem, the damage has already been done.

Contractors say some subsiding cannot be helped. For instance, putting a dam into place to form the construction pit is likely to cause subsiding of 10 millimeters. Total subsiding due to the project will not, they claim, exceed 25 millimeters.