Home > News > Political party: Amsterdammers have the right to be intoxicated

In the concept of its campaign for next year’s town council elections, GroenLinks makes a case for a marijuana growing operation overseen by the City of Amsterdam. A handful of growers must be permitted to supply the product — provided they use ecological farming methods.

GroenLinks believes this approach will bring an end to the involvement of criminal gangs which are now said to be supplying most of Amsterdam’s coffeeshops. 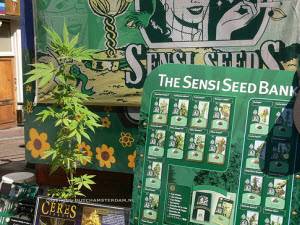 Detail of a stand seen during a Queen’s Day free-market in Amsterdam. Sensi Seeds operates the nearby Hash, Marijuana & Hemp Museum..
© Copyright DutchAmsterdam.nl. Want to use this photo?

It would also reduce the high THC content Dutch-grown marijuana is known for.

“On a national level GroenLinks continues to plead for complete legalization of cannabis. As long as that is not the case, Amsterdam must itself regulate the ‘back door’,” GroenLinks writes, gathering its ideas regarding drugs policy under the motto, “Right to Intoxication.”

Under Dutch national policy, coffeeshops can legally sell soft drugs, while buying stock remains illegal. This ‘legal front door, illegal backdoor’ approach has opened the way for criminal gangs to muscle in on the supply chain. That is one reason why the city may close down 26 coffeeshops within the Red Light District.

GroenLinks is not the first political party to suggest the government gets involved in the operation of cannabis farms. PVDA, a social-democratic political party in the Netherlands, has suggested settig up a number of legal, controlled cannabis farms in order to legally supply coffeeshops.

In November 2008 the mayors of many Dutch municipalities met for a ‘Weed Top‘ conference where they discussed problems and other issues surrounding the country’s coffeeshops policy.

Most mayors want to continue the policy of legalized tolerance, but they are also looking for solutions to address anything from criminals involved in the supply chain to the drugs tourism nuiseance seen in some cities.

Bring back the mushrooms

Despite a national ban on the sale of hallucinogenic mushrooms, GroenLinks also wants Amsterdam to provide smart shops with permits allowing their sale.

These so-called ‘gedoog vergunningen‘ would be similar to the licenses under which coffeeshops are allowed to legally sell soft drugs.

The green party further wants to do away with the zero-tolerance policy at dance parties. Instead it wants to re-introduce an emphasis on informative and education, as well as the testing of XTC pills.

According to GroenLinks the zero-tolerance policy leads to a grim atmosphere instead of a party feeling.

The green-loving political party wants to differentiate between recreational and problematic drugs use, and further suggests that ‘known dealers’ should be allowed to supply hard drugs within the so-called user rooms where those addicted to hard drugs are supplied with clean needles and professional guidance.

GroenLinks also had other ideas, not related to (or, as the case may be, inspired by) drugs.

These include the wish for Amsterdam to become the ‘green innovation city of Europe’ where environmental policies are of prime importance.

The air must become cleaner, and cars must make way for pedestrians, bicyclists and public transport.

There’s also a request for more energy-producing windmills, a ban on circus performances that use wild animals, and the desire for more places throughout Amsterdam where graffitti artists can ply their craft. — © Copyright, DutchAmsterdam.nl