The famed REM island — a platform used in 1964 to broadcast commercial pirate radio and TV programs to the Netherlands — will be towed to Amsterdam where it will be outfitted a restaurant in the harbor.

The two-story structure was bought by De Principaal, the municipal project development company of housing corporation De Key. It will be towed to Amsterdam next month, and the restaurant should be ready to welcome its first guests one year from now. 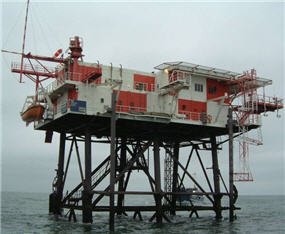 The REM island will be turned into a restaurant.

Until recently the ‘island,’ which was built in Ireland, was located just outside territorial waters, 6 miles off the Dutch coast. The stations — Radio and TV Noordzee — were operated by REM , which stands for Reclame Explotatie Maatschappij (Advertising Exploitation Company).

Broadcasting commenced on Aug. 15, 1964, and countless people in the West of Holland bought and installed the special antennas necessary to receive its TV transmissions. The Dutch government, at the time apparently convinced the sky would fall if people actually heard and saw entertaining programs instead of officially-sanctioned drab, on December 1st adopted a law that prohibited broadcasting from structures at sea.

On December 17, 1964, the Royal Dutch Navy raided the station and the island was confiscated. The Dutch government later used the island as a measuring post. On June 8, 2006, the structure was dismantled and the substructure was demolished.

During the sixties and seventies — and to some extend beyond — dozens of offshore ‘pirate’ radio stations broadcast from ships anchored off the coast of, primarily, England and the Netherlands.

Among the most famous of these stations is Radio Caroline, which nowadays can be heard — broadcasting legally — via satellite and the internet.

You don’t have to wait a year to dine in historical, maritime surroundings. Check our information about Restaurant The Pollux, situated on board of a beautiful 3-master.