Home > About Amsterdam > The 737th birthday of Amsterdam

DutchAmsterdam.com, October 29, 2012 — You’re forgiven if you didn’t realize Amsterdam celebrated its 737th birthday this past weekend. Few Amsterdammers were aware of it either.

But last Saturday the Stadsarchief Amsterdam (Amsterdam City Archives) revealed the oldest known document that refers to the city. 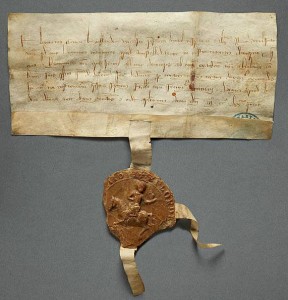 Toll Concession granted to the village of Amestelledamme — now known as Amsterdam — by Count Floris V, on October 27, 1275.

It’s not the first time the document has been displayed, but the document is on view only a few days a year around this date.

On October 27, 1275 Floris V, Count of Holland, granted the inhabitants of ‘Amestelledamme’ the right not to pay toll fees on goods moved throughout the county he ruled.

He made this gesture after his soldiers had wreaked havoc in the small village.

The concession meant that the citizens of Amestelledamme became privileged merchants. It is in part thanks to the toll privilege that their village quickly grew into a major commercial center.

By the way, a, aa, or aem are old Dutch words for ‘water.’ Stelle referred to ‘area,’ ‘place,’ or ‘settlement.’ Add a ‘dam’ and you’ve got a ‘place where there is a Dam in the water.’ To-date the river this dam was placed in is still called ‘Amstel.’ As you see on the video below, back then the river ended in a delta. [More about this]

Shortly after 1300 city rights were granted, and by 1327 the place was known as Aemsterdam.

Captains of ships bringing goods to and from Amsterdam carried a copy of the toll concession as proof that they did not have to pay toll fees when sailing throughout what was then the county of Holland.

The settlement of Amsterdam was born long before 1275, but the toll privilege date stuck and is now considered the city’s official birthday.

How Amsterdam grew from the year 1000 A.D. to the present

A quick work about the Amsterdam City Archives: whether you’re a history buff or not, this is a fantastic place to visit.

Mind you, the collection is mind-boggling and overwhelming, but perfect for a rainy day (which means you’ll have plenty of opportunity to visit).

For a less demanding historical introduction to the city, visit the Amsterdam Museum

Was Amsterdam named after a dam in the river Amstel?

Category: About AmsterdamRelated to: history