DutchAmsterdam.nl — Starbucks is making good on its threat to open more stores in Amsterdam.

Table of Contents hide
1 Why is Starbucks so successful?
2 “Do you like Starbucks coffee?”
3 When in Amsterdam…

Threat? Well, yes, that’s the way we see it. Faithful readers of DutchAmsterdam won’t be surprised. After all, we have not made a secret of the fact that we don’t like the ubiquitous coffee chain. We’ve even published a ‘consumer alert’ of sorts…

As we pointed out earlier, we’re not the only ones who think so:

Why is Starbucks so successful?

That being so, why is Starbucks so successful? It can’t be taste of its coffee. 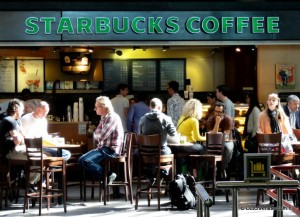 This Starbucks location at the Plaza, Amsterdam Airport Schiphol is the company's best performing store in Europe

“We’ll adjust a bit,” he said. “We’re not changing our recipes, but we’ll likely add a local drink and certainly apple pie.”

But at the time we commented that it’s the recipes we’re concerned about. Many of the coffee drinks we have tasted at Starbucks just weren’t good enough.

Granted: compared to the coffee available at most train station kiosks Starbucks’ brew does fare better. Then again, many train stations now sport a Julia’s — an Italian espresso bar, pasta restaurant and ciabatta lunchroom — and their coffee drinks are miles ahead of those served by Starbucks.

We’ve asked a number of coffee-drinking friends and acquaintances for their opinion about Starbucks coffee. Of the ones who had actually tried it, some said it’s nothing special. Others simply didn’t like the coffee. A few of their responses could not be published in a family forum. (The Dutch do tend to be rather straightforward and to-the-point). Very few actually did like Starbucks coffee but only one of them thought it was better than what he was used to getting at his favorite coffee spot.

We even checked with some total strangers whom we found drinking the stuff at various Starbucks locations. It was hard to find anyone who was actually enthusiastic about their brew.

Mind you, we haven’t done anything close to a scientific survey so this is nothing more than opinion and hearsay.

That said, we can imagine that many people do like Starbucks coffee, or think the ambiance at Starbucks is hard to beat.

But we also think that — for the most part — Starbucks benefits from the same cult-like consumer mentality that has people buy a certain brand of jeans, soda or shampoo.

We believe it’s the name that draws; not the quality of the coffee.

So why do people drink it? Who knows? Perhaps their palate is not well-educated when it comes to coffee. 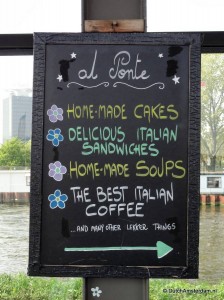 ... and if you truly want Italian coffee served by a real Italian barista, head for Al Ponte

Aside from poor quality at high prices, there is another reason why we’re not thrilled to learn that Starbucks is targeting Amsterdam neighborhoods: we always encourage everyone who visits Amsterdam to experience the place the way the locals do.

Sure, we understand you like MacDonald’s, Burger King, Fish-n-Chips or Irish pubs, but you’re on vacation. Try something new!

When it comes to coffee that means you find yourself an authentic coffee house, or one of those so-called brown café’s.

In general, you’ll want to steer clear of the main shopping streets — and of just about anything that looks like a franchise. If you see too many tourists or a machine that looks like something found in an office canteen, stay away.

Don’t be afraid to ask a local where you can get a ‘lekker bakkie koffie‘ (listen to the Dutch pronunciation at Google Translate).

Besides, if you want your coffee prepared and served the Italian way by real Italians, head for Il Girasole or — our top favorite — Al Ponte. (More about that soon)