Home > Where to eat and drink > Coffeeshops > Will Amsterdam’s famous coffeeshops have to close?

DutchAmsterdam.nl — The free availability of hash and marijuana attracts a lot of tourists to the Netherlands, but the new Dutch government has plans to prevent them from buying weed.

The Christian Democratic Appeal (CDA) party has long crusaded against Holland’s famous ‘coffeeshops‘ — those establishments where soft drugs are legally sold and used. 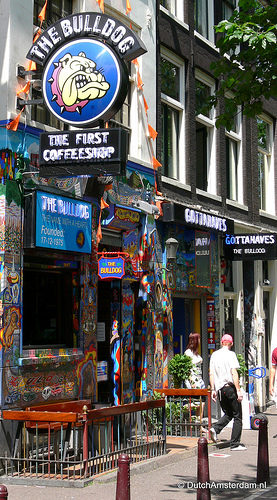 This time around the Christian Democrats are only junior partners of the Liberals (VVD) but — backed by the Freedom Party of anti-Islam firebrand politician Geert Wilders — CDA has nevertheless managed to make far-reaching proposals for the regulation of coffeeshops part of the coalition agreement.

Among other measures the new government plans to transform coffeeshops into private clubs with membership available only to Dutch citizens.

In doing so the politicians in The Hague are bowing to pressure from neighboring countries — as well as the ever-whining U.S. government — for whom drugs-tourism to and from the Netherlands has long been a sore spot.

A 2007 report by Amsterdam’s Department for Research and Statistics showed that of the 4.5 million tourists who spend the night in Amsterdam during a given year, 26% visit a coffeeshop. According to the Amsterdam Tourism & Convention Board, 10% of tourists even mention this as a primary reason to visit the city.

Tolerated since 1976 as a way to create something of a ‘wall’ between users of soft drugs and pushers of hard drugs, coffeeshops have in recent years been subjected to a gradual tightening of rules.

Under tougher policies the country has already seen the number of coffeeshops nationwide dwindle from 1,500 in 1997 to just over 700 today. Amsterdam once had 800 of the establishments. Today 234 are in still in business.

The remaining coffeeshops have outlasted a prediction they would be all be gone by 2010, the effects of a smoking ban (smoking marijuana is fine as long as you don’t add tobacco), and a rule about how close they can be located in relation to the nearest school.

In May 2009 a number of coffeeshops in Amsterdam’s Red Light District were put on notice that they will have to close ‘within three to six years’ as part of the city’s renewal project for the area.

Meanwhile Amsterdam also wants to sever the connection between the coffeeshops and organized crime.

Some coffeeshop owners believe that prohibiting tourists from their establishments may be a violation of EU anti-discrimination rules — but view believe an appeal to the EU would actually work.

The more stringent legislative tack being embarked on echoes a tightening of rules around the sex industry and measures to halve the size of Amsterdam’s red-light district.

For Paul Schnabel, director of the Social and Cultural Planning Office, a state advisory board, the move reflects a growing view that the tolerance policies have not achieved their aims of controlling the ills associated with drugs and prostitution, rather than a recasting of Dutch liberalism.

“There’s a strong tendency in Dutch society to control things by allowing them. It’s always been there, a pragmatic tradition, typical of a trading nation. We look for better alternatives to problems that we know exist anyway,” he explains.

But, he adds, “Dutch society is less willing to tolerate than before. Perhaps 30 years ago we were a more easy-going society.”

The equation that led to the policy of tolerance has changed in the past decade, as large-scale crime around both coffee shops and the legal sex trade became more visible. In particular, the absence of legal means for coffee shops to acquire the cannabis they sell has highlighted its association with organised criminality.

But the open-minded instincts that helped foster the tolerance policies in the first place have also come to be questioned. [1]

Enjoy it while it lasts

— — © Copyright DutchAmsterdam.nl. Do not republish or repost.