Home > Blog > Tada! Amsterdam houseboats to be connected to… sewers.

Lo and behold! Soon they will also be connected to the city’s sewer system.

That’s right. Until now, the vast majority of houseboats in and around Amsterdam have been dumping their waste into what the tourist brochures so aptly describe as the ‘picturesque canals.’

The news comes just a few days after the Netherlands Board of Tourism & Conventions announced that Amsterdam canal tours have become Holland’s most favorite tourist attraction. 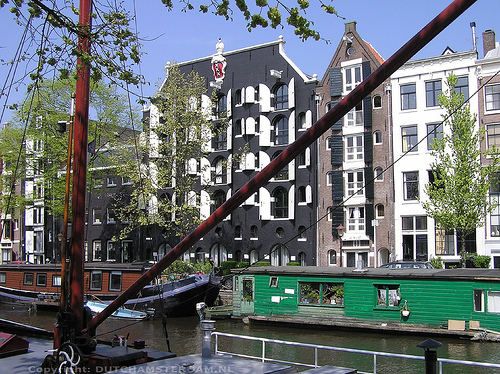 Houseboats at Brouwersgracht, recently declared to be Amsterdam’s most beautiful street. Note the old warehouses which have been converted into apartments.
© Copyright DutchAmsterdam.nl.
Want to use this photo?

The decision to provide sewer connections appears to have been made in response to a recent report by the National Institute for Public Health and the Environment. The study, published last April, addresses the microbiological quality of the water in the Amsterdam canals:

The water in the Amsterdam canals Prinsengracht and Herengracht as well as the river Amstel near the Berlagebrug and the IJmeer at the inlet of pumping engine Zeeburg is contaminated with faeces from human or animal origin. Eight of twelve possible pathogens studied were detected in the water; these are Campylobacter, Salmonella, Cryptosporidium, Giardia, rotavirus, enterovirus, reovirus and norovirus.

Microbiological contamination of the water in the Amsterdam canals can occur through discharge of wastewater from houseboats into the canals, but also through purified or non-purified sewage that enters the canal directly or via the Amstel. People exposed to microbiologically contaminated surface water may develop mild health complaints such as gastroenteritis, skin complaints, and ear and eye complaints, but also more severe conditions like hepatitis.

Every year, particularly during the summer, many people enter the Amsterdam canals, voluntarily or not. Others, like occupational divers, are exposed to the canal water while exercising their jobs. Since the Amsterdam canals are not official bathing sites, water quality is not tested.

Testing of the canal water quality for compliance with the stringent standard values for faecal indicators in the revised European Bathing Water Directive, which came into force in 2006, has demonstrated that water quality did not comply with the standards. The canal water was therefore considered unsuitable for swimming and health risks for persons exposed to these waters cannot be ruled out.
– Source: Abstract, The microbiological quality of the water in the Amsterdam canals. Published Apr. 25, 2007 by the National Institute for Public Health and the Environment

Swimming in Amsterdam’s canals is not recommended — and indeed prohibited — for other reasons than hygiene (or the lack thereof).

The canals provide a convenient dumping ground for, among other things, old bicycles (and any new ones that are not locked to a permanent structure). Should you jump or fall in the water, you wouldn’t be the first person to get his legs stuck in a heap of rusty metal.

That said, should you ever find your way into a Dutch canal, your rescuers will — upon pulling you out — send you off to the nearest hospital for a tetanus shot.

Share what you know about houseboats and floating houses.