Home > Where to Stay > Airbnb > Airbnb in Amsterdam

Should you book Airbnb when visiting Amsterdam?

As elsewhere, using Airbnb is a popular option for tourists visiting Amsterdam — even though, on average, in Amsterdam a night with and Airbnb host is more expensive than a night in a hotel. 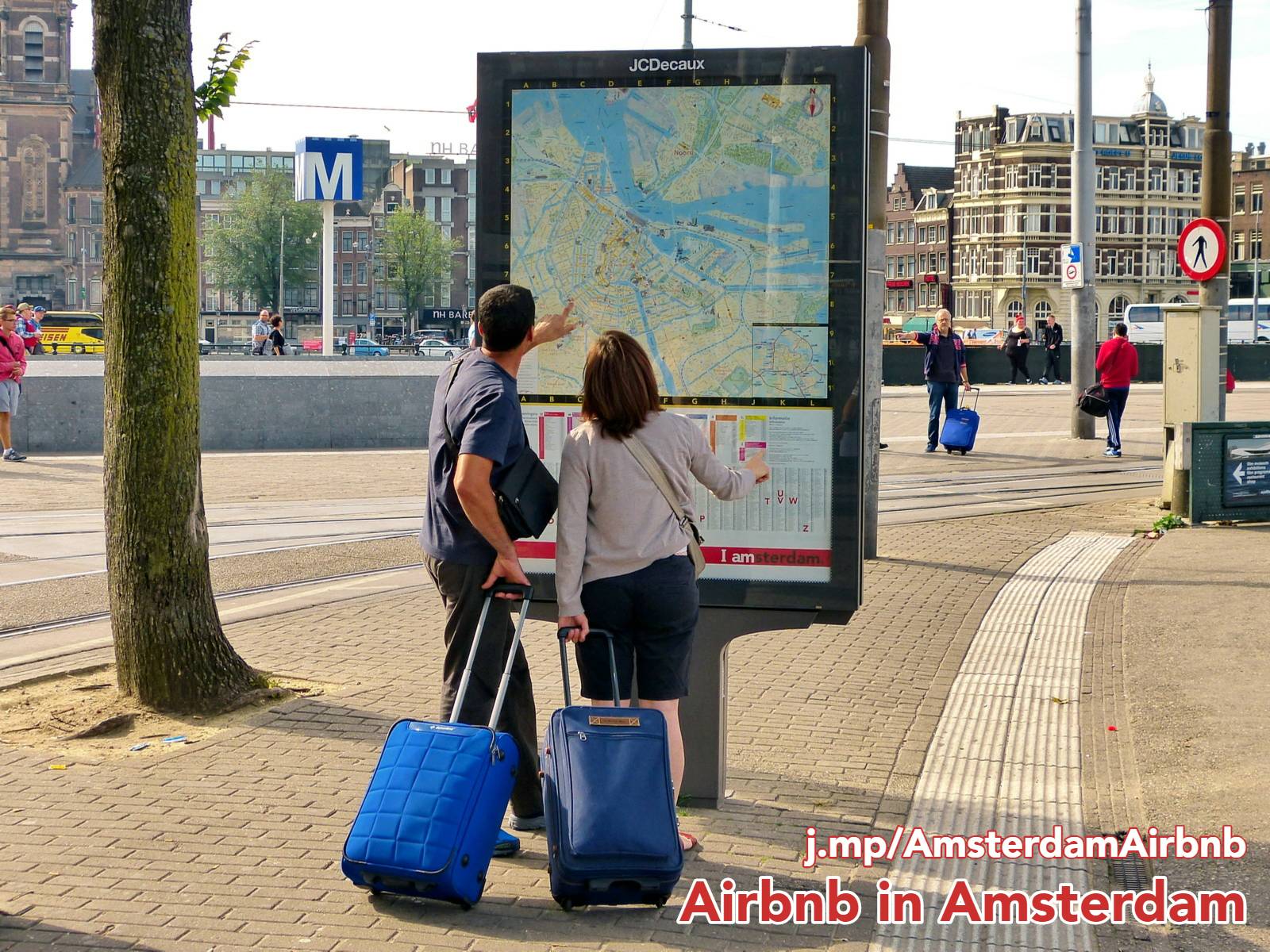 Airbnb tourists at Amsterdam Central Station, studying a map to figure out the best way to get to their destination

While Airbnb may be a perfect income opportunity for some citizens of Amsterdam, most Amsterdammers — ourselves included — would rather see Airnbnb banned.

As described below Airbnb is causing many problems in the city — so much so that the Amsterdam City Council has laid down many rules and regulations for those who wish to make their homes available via Airbnb and similar services.

The newly formed city council (May 2018) is even looking for ways to ban Airbnb from certain districts, including the city center.

On this page we explain the problems surrounding Airbnb in Amsterdam, as well as the local rules and regulations (with updates).

In recent years Amsterdam has been overwhelmed with an ever growing number of Airbnb tourists.

As in many other places throughout the world the influx of tourists in, primarily, residential areas is causing countless problems.

According to data compiled by InsideAirbnb there are more than 6000 illegal Airbnb apartments in Amsterdam — homes rented out year-round. At least 1300 apartments were listed on the official website as accommodating more than 4 people, which is against the law. More than 4000 hosts had multiple listings, often under fake names.1 These hosts are more than likely running businesses, in violation of short term rental laws.2

Amsterdam Airbnb: In the News

Book a hotel, houseboat, apartment, room, or any other accommodation via our trusted partner, Booking.com

The following section is an archived article.

Updated, Dec. 18, 2014: The City of Amsterdam and Airbnb have reached an agreement that will see the property rental service collecting tourist tax from hosts and remitting it to the city on their behalf.

The agreement will take effect on 1 January 2015, and Airbnb will start collecting tax from February 2015.

Airbnb and the City of Amsterdam have also agreed

In Amsterdam more than 6000 properties are made available via Airbnb — almost half of the total number of rental opportunities listed for all of the Netherlands. 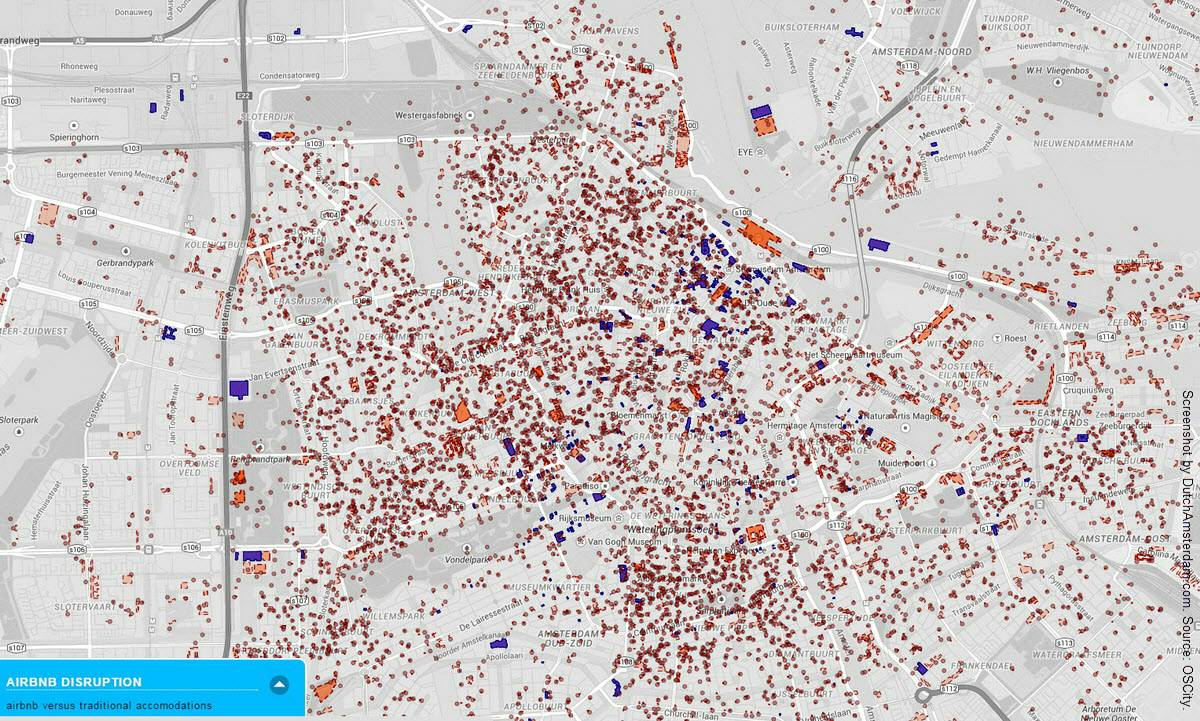 This map, provided by OSCity.eu, shows the location and distribution of conventional accomodations (blue) vs properties offered for rent via Airbnb (red)

73% of the properties offered via Airbnb are located outside the Amsterdam neighborhoods where most hotels are situated.

Noteworthy is that, even with an extensive supply, properties in the center of Amsterdam demand high rental rates.

This map, using data collated by OSCity, shows how much money Amsterdammers are asking for rooms, either private or shared, and entire houses or apartments: 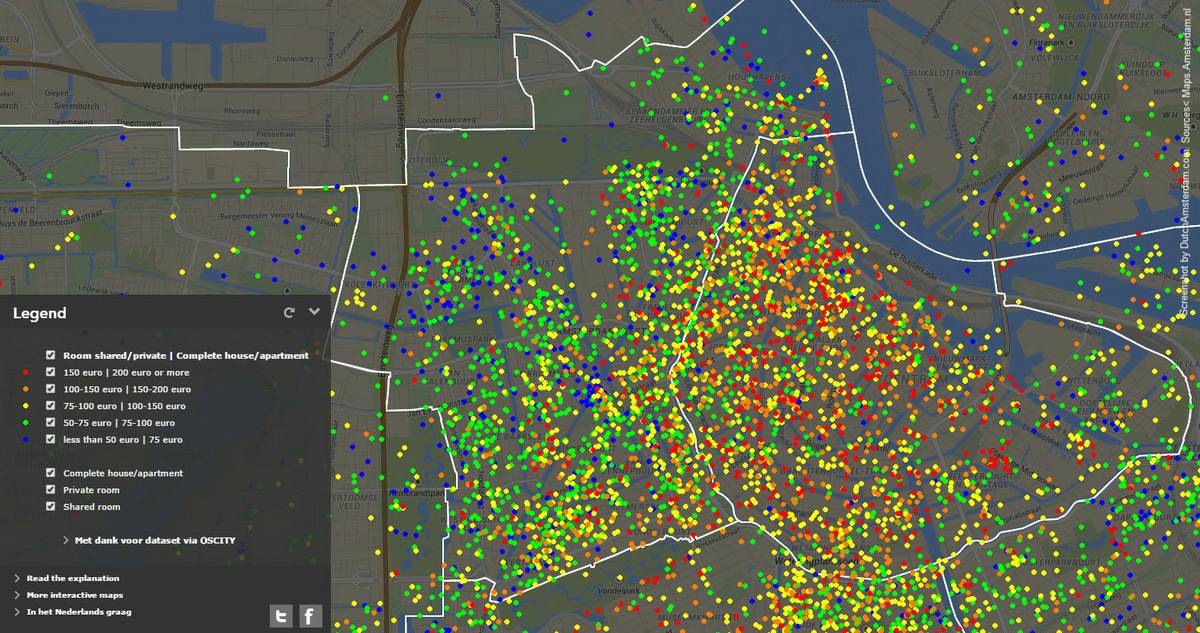 Using data collated by OSCity, the City of Amsterdam produced this map showing how much money Amsterdammers are asking for their rental properties

Update, Feb. 14, 2014: The City of Amsterdam has approved a new law that allows residents to rent out their privately-owned homes for limited periods of time.

The law, which creates a ‘private vacation rental’3 category, was written with the issues surrounding Airbnb and similar services in mind.

Amsterdam is the first city in the world to pass such a law. 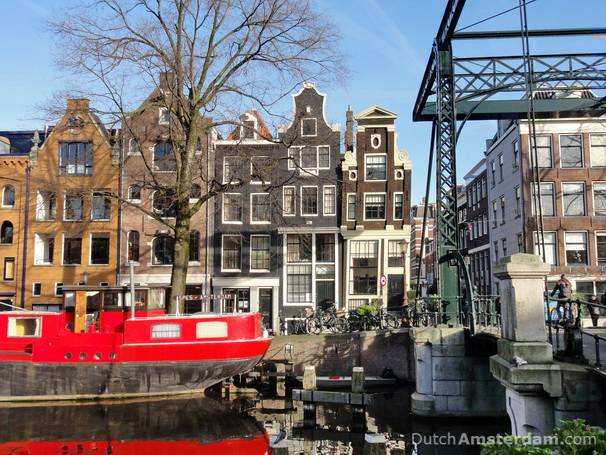 Under the terms of the new law, hosts may rent out their homes up to two months a year, to up to four people at a time.

A home owner who wishes to make his home available as a vacation rental, must be registered as living at that address. The home may not be exploited as a business.

The home-owner will be required to pay all applicable taxes, including income- and tourist tax.

People who rent instead of own their homes may also rent out their residence, but only if they obtain permission from the landlord or housing corporation, and then only if their base rent is more than € € 699,48 a month.

The homes must meet all fire- and safety rules.

If renters act in ways that generate noise- or nuisance complaints from neighbors, authorities may prohibited the owners from further rentals.

People who violate the rules may risk a fine, a bill for back-taxes, or the loss of their home.

Airbnb has announced Amsterdam’s decision on its website, where it also carries Dutch-language ‘Responsible Hosting’ information for those renting out their homes.

Update, Oct. 15, 2013: A judge in Amsterdam has ruled that homeowners who rent out their home for short-stay visitors are illegally exploiting their residence as business.

The ruling can have a large impact Airbnb and similar services for whom Amsterdam is a top destination.

The case was brought before the court by the owner of an apartment in a housing complex. Once of twice a month he allowed tourists to rent for a few nights.

The man’s home owners association ruled that it was illegal for him to rent out his apartment, after which he took legal action.

Amsterdam has some 4500 home owners associations, covering the vast majority of the city’s private homes. 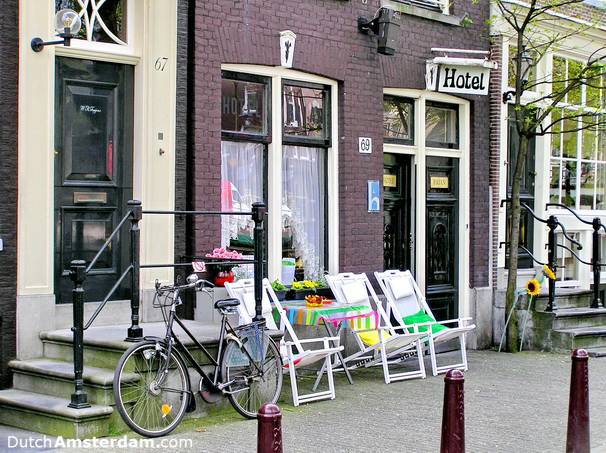 Hotel Brian, at Singel canal, Amsterdam (not a private residence)

Update, Feb. 18, 2013: Airbnb has said it will cooperate with the Municipality of Amsterdam to reject illegal hotels from its website.

Alderman Freek Ossel (Housing) says tells local newspaper Het Parool he is pleased with the outcome of a meeting with Airbnb’s European director and a representative from the organization’s headquarters in San Francisco.

A preliminary check by the Housing and Social Support Department shows that 700 of the nearly 3,000 houses advertised for rent on Airbnb are in use as illegal hotels.

Report: “Airbnb could be banned in Amsterdam.” Not True.

DutchAmsterdam.com, Feb. 5, 2013 — Various national and international news outlets recently reported that Amsterdam is on the verge of banning Airbnb — an online marketplace for temporary accommodation in countries around the world.

However, that is not the case. 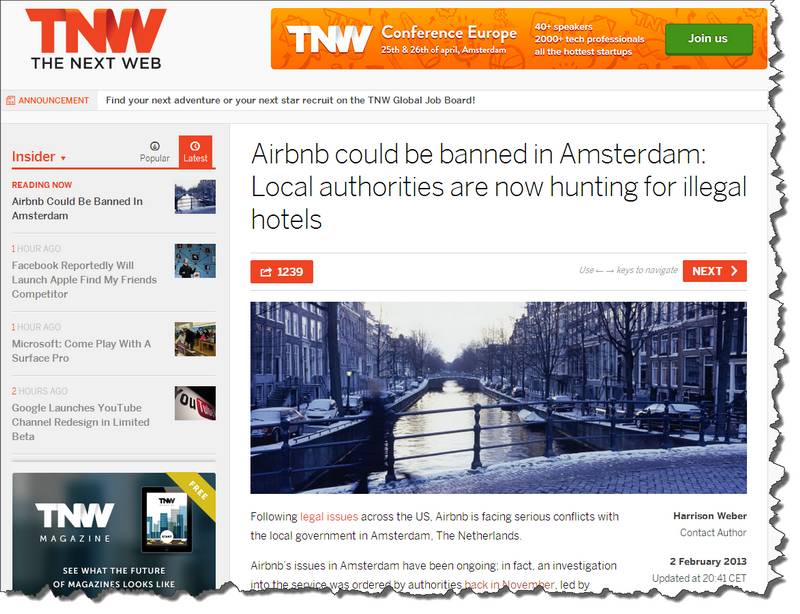 Screenshot of a news article about Airbnb in Amsterdam

The message was based on a news article published that same day in local daily Het Parool, reporting on the city’s intensifying hunt on illegal hotels, particularly in the center of town.

Het Parool quoted Jan-Jaap Eikelboom, spokesperson for the Amsterdam Centrum borough, as saying that starting next week officials of both the Centrum borough and Dienst Wonen, Zorg en Samenleven (Housing and Social Support Department) will check houses in the center of the city.

The city believes some 2000 houses are in use as illegal hotels, many of which are located in the center district.

In June 2012, a fire that destroyed a historic building took the lives of two people who were temporarily staying there. 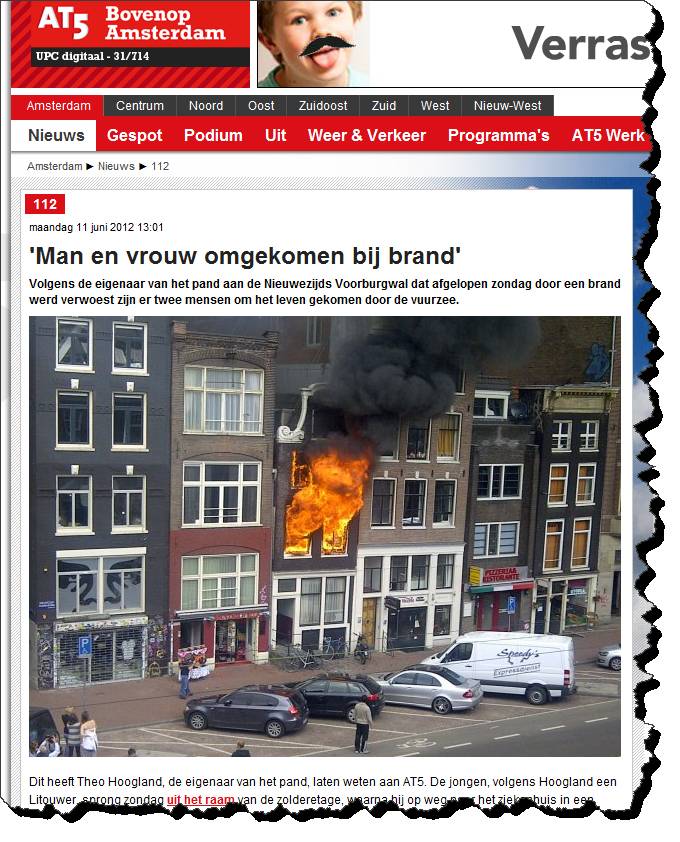 Fire at Nieuwezijds Voorburgwal 138, Amsterdam, as reported at AT5. June, 2012

Just a month prior to the fire the company of the building’s owner had received a permit from the Centrum borough to rent out the empty, two-story house until a renovation permit would be issued. However, the event brought renewed focus to the discussion over properties that were illegally used as hotels.

In November and December of last year, officials checked some 200 specific addresses about which neighbors had complained regarding nuiseance such as noise, loitering, or an never-ending stream of different people going entering and leaving.

These homes were evaluated for fire safety, and whenever illegal hotels were discovered they were immediately closed.

With housing at a premium in Amsterdam, strict rules govern how properties may be used. Using buildings zoned for private apartments as hotels — thus withdrawing them from the residential rental market — is against the law.

Eikelboom told Het Parool that his teams may now check entire streets at once, instead of going to individuals addresses. He said they will also check homes that are being advertised on websites like Airbnb and Wimdu.

Checking for violations of fire safety regulations may seem to be a roundabout way to investigate illegal rentals. Eikelboom acknowledges it’s a simple method, and explains that dealing with such properties is a legally complicated affair.

No ban on Airbnb or similar sites

But the conclusion that a ban is imminent is not correct, Eikelboom told Het Parool yesterday.

“Of course we do not want to prohibit Airbnb,” he says. “On the contrary; that’s a good initiative.”

“Rather, what we hunt for are those people who present themselves as private individuals, but in fact rent out properties that are uninhabited, and thus knowingly violate the law,” he explains. 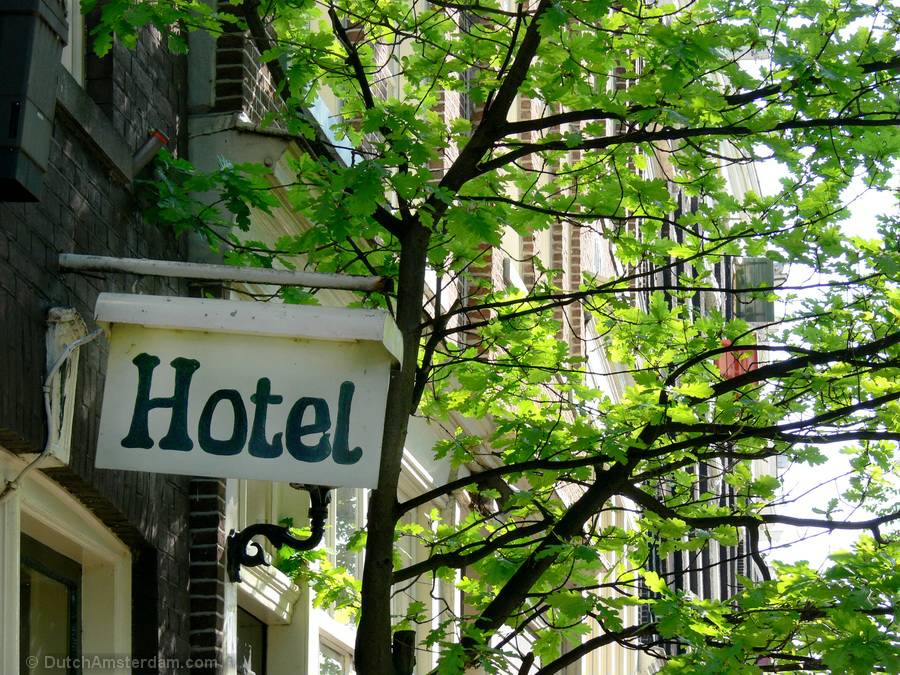 Old fashioned sign of a hotel on Singel canal in Amsterdam

According to Eikelboom, the marketplace websites will only be used to see whether premises are offered for rent about which there is a suspicion that it concerns an illegal hotel.

Last November alderman Freek Ossel (Housing) told Het Parool, “That you rent out you home for a month while you’re on vacation is not necessarily illegal. But we notice that some home are being rented out quite often during the year.”

As an example he mentioned an apartment that was offered for rent ‘due to vacation.’ But when you clicked on the advertiser’s fictitious name, you see that the ‘landlord’ also has four other apartments on offer.

“In that case you’re not talking about someone who is leaving for a week and wants to earn some extra money,” Ossel said.

The city is still contemplating how to let tourists know that there are risks associated with illegal rentals.

“In our previous enforcement action some tourists found themselves out on the streets,” Eikelboom warns. “They lost their money and had to find other accommodation.”

As of January 1, 2017, anyone who illegally rents his home to tourists — not just those who use Airbnb, will face a maximum fine of 20.500 euro.

Meanwhile law enforcement officers scour the internet in search of people who advertise their property for rent for more than 60 days a year — the legal limit.4

Airbnb itself has agreed to close the account of anyone rents out his or her home for longer than legally allowed.

For our locals readers: Dit zijn de regels waaronder u uw woning mag verhuren via Airbnb of soortgelijke bedrijven. [Link leads to Dutch-language information on the city’s official website, detailing the rules and regulations for renting out privately-owned property.

This article was first published on February 5, 2013. The portion starting with “What Happened Earlier?” is archived. Up-to-date information on Airbnb in Amsterdam is posted at the top.

Book a Hotel, Apartment or Houseboat
Student? Intern? How to find and rent a room in Amsterdam (for students and interns)