Home > News > Amsterdam street artists may soon have to audition

DutchAmsterdam.nl — Buskers may soon have to audition before being allowed to perform in the streets and squares of Amsterdam.

A majority of Amsterdam’s city council is in favor of such as plan if it will result in a ban on obnoxious ‘living statues’ and bad musicians, writes local daily Het Parool.

Yesterday the paper reported that owners of businesses at Dam square are fed up with ‘criminal,’ fake artists. 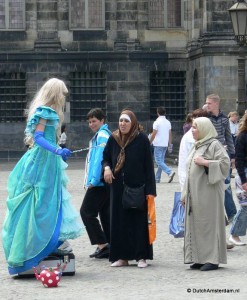 A living statue at Dam square, Amsterdam. (Not one of the troublemakers)

They demand that the City allows only fully licensed artists to perform on the square.

The request was made by Stichting Dam, a foundationg representing entrepeneurs at Dam square, and Amsterdam City, which represents entrepeneurs throughout the inner city.

A number of street artists — including several co-called ‘Living Statues — are licensed to perform at Dam Square.

A ‘living statue’ is a mime artist who, while wearing a costume and makeup in sculpture-like colors, poses like a statue — standing still for long periods at a time.

But in recent years, Dam square has been inundated with fake ‘statues.’ These beggars — primarily from Eastern Europe — usually wear masks depicting monsters or gorillas, and carry fake pistols and axes.

They regularly threaten or verbally insult onlookers who do not pay up.

Herman Roelofs, a board member of Stichting Dam, says he has even seen people ‘attacked by a masked monster with a knife.’

Last January the City already said it would examine whether its policies for street artists could be tightened.

However, at that time a similar audition proposal suggested by representatives of the CDA party was mocked by other members of the city council.

Last year the city handed out more than 200 tickets to street artists who caused problems.

“We get complaints that range from nuisance to outright begging and pick pocketing,” says Edwin Oppedijk, spokesman for the Center Borough.

He says it’s an open secret that in the morning some of them arrive in a van, get handed masks and costumes, and get picked up again at the end of the day.

Roelofs tells Het Parool it’s an organized group of Romanians who regard the square as their territory.

Last year the fake statues interfered with the performance of a far more popular street artist.

Having gathered a large audience, the statues decided to ‘perform’ inside his circle of onlookers. The street artist was not amused — and neither was his audience — which awarded him with what apparently was a larger-than-usual offering, while shunning the rude beggars.

Not Idols for street musicians

The city council does want to make sure any audition proposal targets only the trouble makers.

“We must tackle the beggars, but we also must avoid a situation in which only professional musicians and artists get a chance to perform, said Labour councilor Geke van Velzen.

Other council members agree. We don’t want and ‘Idols for buskers,’ Boomsma says.

An Amsterdammer last updated this post on Wednesday, March 20, 2013, at 9:12 AM CET (Central European Time)