DutchAmsterdam.nl — A fire that destroyed a historic building the in the center of Amsterdam on Sunday has cost the lives of two people. 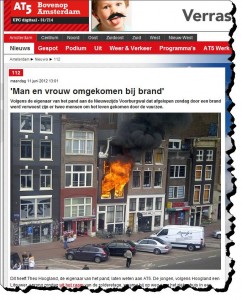 Fire at Nieuwezijds Voorburgwal 138, Amsterdam, as reported by AT5

Upon their arrival firefighters found a severely wounded man on the sidewalk. The men died on the way to the hospital.

Today a second body was found inside the burned-out building.

Police can not yet say whether the victim was male or female, but the owner of the building told local TV station AT5 the second victim was a women.

Initially firefighters thought it possible that more victims would be found, but that turned out not to be the case.

There was confusion yesterday about how many people may have been in the building.

The city of Amsterdam today says 10 people were in the house.

According to the fire brigade the building is listed as a private residence. However, neighbors told the police they suspected it was in use an an illegal hotel.

The building’s owner, Theo Hoogland of real estate firm Theodor’s Monumenten BV, explains just last month his company received a permit from the Centrum borough to rent out the empty, two-story building until a renovation permit would be issued.

Since the building is a National Monument (Rijksmonument), the process of obtaining a building permit takes a long time.

The company therefore signed temporary rental permits with five people from Poland and one from Latvia.

View Historic building in Amsterdam burns down in a larger map

Hoogland tells local daily Het Parool that one hour before the fire broke out there was a fight between residents of the building.

“Barely and hour later the building was ablaze,” Hoogland says. “That is strange.”

During the fire the historic building partially collapsed.

Last night an unstable portion of the facade was demolished as well so, after which firefighters found the second body.

The building will be fully razed after the investigation into the cause of the fire has been completed.

An Amsterdammer last updated this post on Wednesday, March 20, 2013, at 9:10 AM CET (Central European Time)