DutchAmsterdam.nl — Just like Barcelona(.bcn), London (.london), Paris (.paris) and New York (.nyc) have done for their cities, the municipality of Amsterdam has applied to buy the ‘Top Level’ internet domain .amsterdam.

If, as expected, the request is approved companies, organizations and individuals will be able to use a internet address that ends in .amsterdam by the end of 2012 or early 2013.

Requests for custom .amsterdam names can already be filed at dotamsterdam.nl.

A Top Level Domain (TLD) is the part that comes after the dot (period) of an internet address. The best known TLDs are .com, .org, and .edu, or country names such as .nl — which stand for the Netherlands.

A small version of the

A domain name is the part that come before the dot. Thus in the city’s official marketing website, iamsterdam.com, iamsterdam is the domain name, and .com the Top Level Domain.

ICANN, the organization that oversees the management of the Top Level Domains, on April 12th opened up new TLDs for cities and states, but also for brands (.cocacola) or generic terms (.phone).

It takes about one year for ICANN to determine whether the request meets all legal qualifications, but once approved you may see internet addresses such as hotels.amsterdam, kroegentocht.amsterdam (pubcrawl), voetboogstraat33.amsterdam (address), or jandewinter.amsterdam (personal name). An example of an email address would be bookings@hotels.amsterdam.

Some cities, such as Barcelona and New York, have elected to apply for the International Air Transport Association‘s three-letter codes of their primary airports — .bcn and .nyc respectively.

The city chose for .amsterdam — since the term ‘amsterdam’ is better known than ‘AMS’ the IATA code for Amsterdam Airport Schiphol.

The TLD .amsterdam is expected to complement the city’s marketing motto, I Amsterdam. 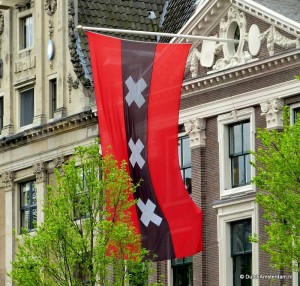 Another marketing incon: the Amsterdam Emblem

The city hopes to earn back its investment by selling custom domain names. It has selected Haarlem-based magazine publisher HUB, one of the largest IT-publishers in the Benelux, to commercially exploit the custom .amsterdam domain names for the next five years.

Hub has established a separate company, dotAmsterdam BV, to operate the concession. Profits will be split with the city of Amsterdam.

Local daily Het Parool reported in March that Lodewijk Asscher, alderman of Finances, Economics, Airport and Harbour, and deputy mayor of Amsterdam for the Labour Party, has waived a public tender in the selection process of the partnering company.

In addition the paper reported that Unifiedroot — a local, Dutch competitor of ICANN — had offered the .amsterdam TLD to the city for the symbolic amount of one Euro.

However according to Asscher, only ICANN would be able to provide a hundred percent coverage.

Another issue is that by registering with ICANN the .amsterdam domain name is subject to U.S. laws and policies on privacy and terrorism. Het Parool notes that makes everyone who operates a custom .amsterdam domain subject to America’s ‘Patriot Act’ (which, as American tourists are given to understand shortly after arriving in Holland, is widely ridiculed and criticized by the Dutch as, among things, ‘over the top.’)

Dutch privacy laws also do not apply to domain names controlled by ICANN.

Furthermore any domain name could be subject to restrictions demanded by the U.S. judicial system.

HUB director Paul Molenaar says the domain name will be registered with Dutch registrar SIDN, which also manages the .nl country TLD, and according to him will therefore be subject to Dutch law rather than U.S. law ‘though that sometimes remains unclear.’

An Amsterdammer last updated this post on Wednesday, March 20, 2013, at 9:16 AM CET (Central European Time)