Home > News > Defeat for silly rule: You can once again drink while standing in Amsterdam

Amsterdam, Aug. 5, 2009 [DutchAmsterdam.nl] — Bottoms up! Effective immediately it is once again possible to drink an alcoholic beverage at an outdoor café terrace while standing.

Amsterdam mayor Job Cohen has told a local action group he will tolerate drinking while standing at terraces — an activity until now prohibited by the local by-laws (Algemene Plaatselijke Verordening).

The rule had been on the books for years but was not enforced until it was dusted off by the folks who run the Amsterdam Centrum borough.

Known for their penchant to try and regulate every aspect of life in the historic city center, their Terrassennota 2008, introduced in April 2008, detailed anything and everything that can possibly be organized and smothered in rules where terraces are concerned.

Enforcement was heavy-handed: If you were caught drinking while standing up at an outdoor terraces, the café’s proprietor got in trouble.

So notorious has the Center borough, led by Els Iping (PVDA, labour party), become for its barrage of proposed and enforced rules and regulations that downtown Amsterdammers have set up a pressure group meant to send a strong signal: the citizens of Amsterdam do not want you to change Amsterdam into a sleepy village.

The pressure group was named Ai!Amsterdam, a play on the city’s marketing term, IAMSTERDAM.

Early July the group opened a website in which it called for a mass demonstration of civil disobedience. A few days later, on July 10, thousands of Amsterdammers showed up at the Noordermarkt, turning the square into Amsterdam’s largest outdoor terrace. Most people brought cans of beer and bottles of wine.

“Hey you there! Yes you!” a DJ yelled in his microphone. “What you are doing — standing on a terrace holding a beer — that is not allowed! You are in….” “Vi-o-la-tion,” the crowd intoned — raising their cans and bottles in the air.

Police officers stopped by every once in a while, but took no action. The city had provided a last-minute permit for the event.

Ai!Amsterdam also sent a petition, signed by 19.000 Amsterdammers, to the Center borough. 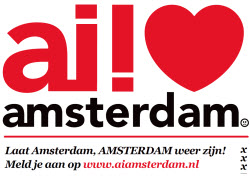 When after two weeks the pressure group did not receive any response from the rule-makers it encouraged Amsterdammers to download and post a poster.

At the same time the group announced that it intended to organize a larger demonstration.

Two days later Ai!Amsterdam announced that its representatives were invited for a meeting with mayor Job Cohen.

The mayor says drinking while standing at a terrace will be tolerated, as long as the drinkers do not venture outside the boundaries of the terrace and do not create a nuiseance.

Enforcement of various terrace rules became a priority in the run-up to a nationwide ban on smoking in all public places of employment, including restaurants and cafés. City officials had feared that smokers would pop out for a smoke and, drink in hand, would create a nuiseance.

To further discourage smokers and non-smokers from standing around with a drink, the officials further decided that cafés would not be allowed to outfit their terrances with heat lamps. Dutch weather is notoriously fickle — often providing weather from three or four seasons in a single day.

Ai!Amsterdam activists are satisfied with Job Cohen’s decision, but one of them, Rogier van Kralingen, tells local newspapers Het Parool they remain concerned about the many other rules that get in the way of ‘freedom and a relaxed atmosphere in the city.’

The city of Amsterdam has recently stepped up its long-time lobbying efforts to get its historic center placed on the Unesco World Heritage list.

See Also:
 How to visit an Amsterdam café
 Ordering a beer — according to The Undutchables