Table of Contents hide
1 On This Page:
2 How to get from the Airport or Amsterdam Central Station to the Cruise ships terminal
3 Private Transfer
4 Map to and from Cruise Ship Terminal
5 Book a Cruise
6 Hotels Near Passenger Terminal Amsterdam
7 Possible Cruise Terminal Move
8 Cruise ships provide the city with income

It is easy to travel from Amsterdam Airport Schiphol to the Passenger Terminal Amsterdam (PTA). PTA is where most seafaring cruise ships dock. Most river cruise ships also moor in the vicinity. 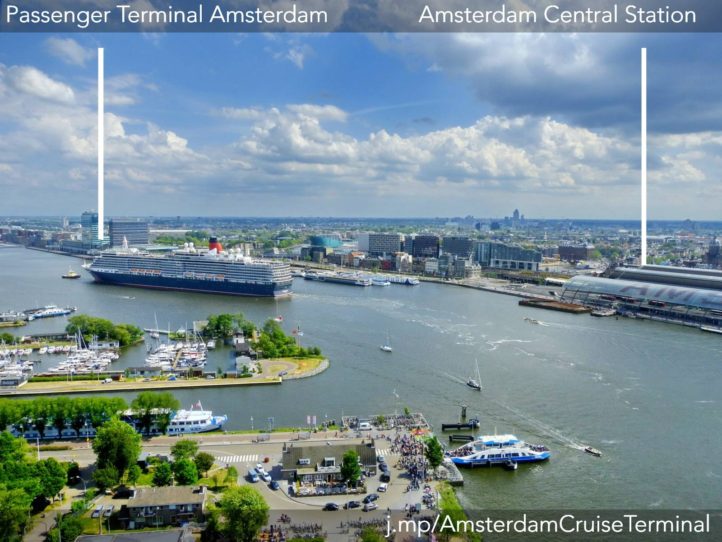 It is just a 10-minute walk from Amsterdam Central Station to the Passenger Terminal Amsterdam, where most seafaring cruise ships arrive

Private Airport Transfers to and from the Cruise Terminal

Map to and from Cruise Ship Terminal 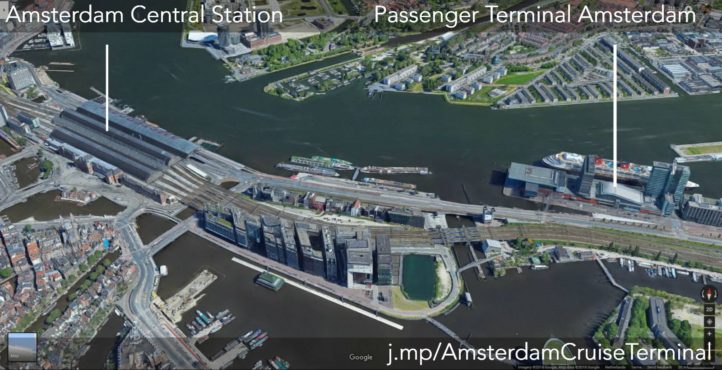 Book a cruise with Amsterdam as your departure port

Many cruise ship passengers spend a few days in Amsterdam before and/or after their cruise.

Since Amsterdam is so compact, basically any Hotel, Hostel, or Bed & Breakfast in the center of the city is a good choice. See our Amsterdam Hotel Guide for our suggestions, ranging from budget- to luxury hotels.

The highly rated Mövenpick Hotel, right next to the cruise ship terminal, is a popular choice. It offers spectacular views of the River IJ and the city center.

Similar views have people raving about the Sir Adam Hotel, which is situated across the river in the iconic A’DAM Toren (which comes complete with a fabulous observation deck).

Take a look at these other options:

The Passenger Terminal Amsterdam may have to be moved to a new location in the near future. A final decision to that end will be made by the City Council at the end of 2018, but most observers believe that to be just a formality.

The new terminal will be located in the Port of Amsterdam — outside the city’s center. It would have to be operational by 2024.

There is a possibility that the current terminal will continue to operate, servicing small cruise ships only.

There are two reasons behind the proposed move:

The Executive Board of Amsterdam points out that a new terminal in the Coenhaven will be able to handle 230 ships (700.000 passengers) a year. In addition, it will be able to accommodate mega ships — those longer than 360 meters.

From 2019 these ships will be able to pass the sea locks in IJmuiden, 25 km (14 nautical miles) away. The quay at the current PTA location cannot service these ships.

But members of the City Council have indicated that they do not intend to allow PTA to grow in the number of ships it handles. They say that growth can only be considered if and when it becomes clear that the new terminal location discourages passengers from visiting the city center. In our view, that is a foolish way to think and act. Politicians…

Each cruise ship on average results in about a half million euro income for the city — in terms of what passengers spend, especially those who start or end their cruise in Amsterdam. Think about airport tax, hotel tax, and sales tax in shops and restaurants.

Also included in that amount is turnover tax paid by local businesses.