Amsterdam, May 13, 2008 (DutchAmsterdam.nl) — The City of Amsterdam has announced that it does not intent to extend existing operating licenses for gambling halls ‘Molensteeg’ and ‘Buddy Buddy,’ both located in the Red Light District.

That is because Holland’s Justice Department views owner Marcel Kaatee as the financial man behind top-criminal Willem Holleeder, who for years extorted money from real estate tycoon Willem Endstra.

Along with Holleeder and several other people, Kaatee was arrested at the beginnen of 2006 on suspicion of involvement with the extortion of Endra, who was murdered in 2004. According the the Justice Department, Kaatee was aided Holleeder in a number of ways.

Last December a court in Haarlem exonerated Kaatee of these charges. He was, however, found guilty for his involvement with the whitewashing of money.

According to Amsterdam daily Het Parool, mayor Job Cohen informed Kaatee at the end of January that his permits would not be renewed, because there is a ‘serious measure of danger’ that the gambling halls are being used for money-laundering.

The decision was based on the so-called BIBOB law. Passed in 2003, the law is intended to prevent funds earned through criminal activity being passed through the legal economy. 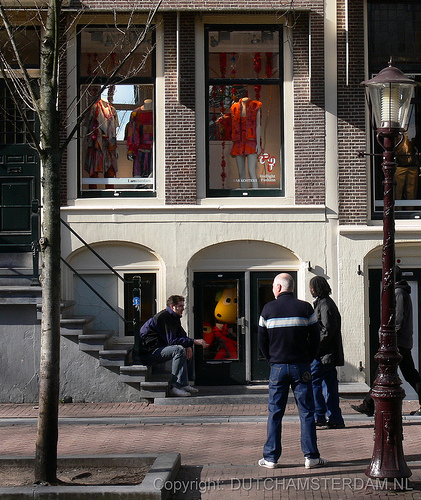 Fashion Designers show their wares in the windows where prostitutes used to flaunt their bodies.
© Copyright DutchAmsterdam.nl.
Want to use this photo?

Het Parool reports that over the last few years, millions of Euros have been invested in Kaatee’s gambling halls by Wilbury Ltd., a small company based in the British Virgin Islands. It it operated by a realtor who, according to the Justice Department, has helped Holleeder sluice away extortion money.

Cleaning up the district

Recently, the BIBOB law has also been used to close many of the Red Light District’s prostitution windows. It is part of what the City says is a general crackdown on money-laundering and related crimes — as well as efforts to clean up the area.

Plans to upgrade the 750-year-old neighborhood over the next ten years include banning window prostitution from all but two locations. Currently two of the district’s most famous sex clubs are also threatened with closure under the BIBOB law.

In a move reported by news outlets around the world, the City of Amsterdam has — initially for the period of one year — allowed several fashion designers to set up shop in the small rooms that were until recently used by prostitutes.

Category: News, Red Light DistrictRelated to: Project 1012, Red Light DistrictThis article is updated regularly. Last major update: May 14, 2008
Last minor update: Sunday, September 25, 2011 at 1:21 PM, Central European Time (CET)
Transparency:
The DutchAmsterdam website includes affiliate links. That means we get a small commission — at no additional cost to you — for each purchase you make. Your support helps us provide this site free of charge. Naturally, as our Editorial Policy states, our content is never influenced by our advertisers or affiliates.