DutchAmsterdam.nl — Consider this a ‘consumer alert’ of sorts… Starbucks is finally putting some haste behind its ever-so-slow roll-out in the Netherlands.

Table of Contents hide
1 Starbucks in Amsterdam
2 Netherlands Has a Fantastic Coffee Culture
3 Starbucks: Worst Coffee at the Highest Prices

Not that we’ve been waiting for it, considering the fact that — as coffee connoisseurs — our experiences with the current Starbucks locations in Amsterdam have been far less than satisfying. In our opinion, Starbucks = no stars and too many bucks.

Don’t get us wrong: it’s not that we’ve never had a decent cup of coffee at Starbucks, but rather that over the past few years we haven’t got a great cup of coffee — one that justifies both the price and the hassle. Hassle? Yes, the hassle of Starbucks pretending to have some Italian roots by using (and occasionally misusing) Italian terminology in its menu — though admittedly that’s a minor concern.

Anyway, there are people who — for one reason or another — do like Starbucks coffee. We figure those are the same folks who upon their arrival in Amsterdam head for the nearest McDonald’s for a ‘taste of home.’ 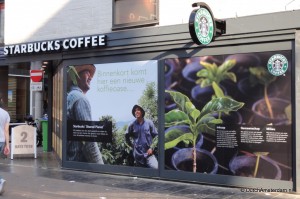 Starbucks, Leidsestraat 101 in Amsterdam
© Copyright DutchAmsterdam.nl. Want to use this photo?

It come as no surprise that Starbuck’s first ‘real’ store in Amsterdam opened today in Leidsestraat, just a stone’s throw from Leidseplein. Locals will recognize the spot as the erstwhile location of Austalian Ice Cream.

It’s sure to be a hit with tourists. Amsterdammers, meanwhile, will likely prefer the CoffeeCompany just down the street (Leidsestraat 60) which, incidentally, was the first of 24 locations in Amsterdam, Utrecht, The Hague, Groningen, Rotterdam and Delft.

Technically Starbucks has had a presence in Amsterdam since 2002 when it opened a roasting plant at the Port of Amsterdam. The plant included a little-known store.

Holland’s second Starbucks store is located inside the Nike’s headquarters in Hilversum — but it is accessible only to Nike employees.

In 2007 Starbucks opened three locations at Amsterdam Airport Schiphol — 1 in the main plaza, one across from Arrivals 4, and one in the Terminal 1 departure area.

Later the chain opened Starbucks stores at the train stations of Amsterdam, Utrecht and Leiden.

The train station locations are co-operated with Netherlands Railways daughter Servex, and the Schiphol stores are teamed with HMS Host. Hence the location at Leidestraat is considered Starbuck’s first ‘real’ store in Amsterdam.

“Within a year we’ll have ten new stores,” European Director Rich Nelson tells Dutch news agency ANP, promising that this is only the beginning.

Inititally the company will focus on the Randstad — the sixth-largest metropolitan area in Europe. It consists of the four largest Dutch cities (Amsterdam, Rotterdam, The Hague and Utrecht), and the surrounding areas.

Netherlands Has a Fantastic Coffee Culture

“The Netherlands has a fantastic coffee culture so we should have done this long ago,” Nelson admits. He tells ANP he believes Starbucks will do well, even though other company’s have already filled what he believes to be the hole in the market. Nelson is not worried about Starbucks’ chances: “There is still plenty of room and usually we create growth in a market.” 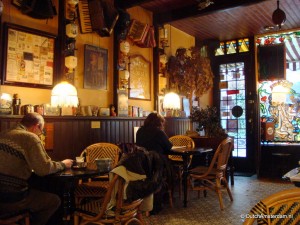 Petit Grand Café ‘Granny’ in Amsterdam
© Copyright DutchAmsterdam.nl. Want to use this photo?

Nelson says the company learned what Dutch consumers like from its train station shops. “We’ll adjust a bit. We’re not changing our recipes, but we’ll likely add a local drink and certainly apple pie.”

But it’s the recipes we’re concerned about. Many of the coffee drinks we have tasted at Starbucks just weren’t good enough.

By the way, the Dutch rank fifth in the world when it comes to yearly per capita consumption of coffee, while the USA ranks 27th.

As for us — we’re finished with Starbucks. We’ve given its Amsterdam locations more than enough of a chance to shape up. Instead, we head to our usual coffee hot spots, ranging from such café’s as Het Loosje and De Tuin to dedicated coffee stores like Lungoccino and Al Ponte.

We suggest you do the same. When in Amsterdam, find yourself a coffee house or café that’s filled with locals. Order a coffee. Enjoy it and perhaps light a candle for Starbucks. They’re going to need it.

Incidentally, we’re no alone when it comes to our observations about Starbucks: