What is the weather like in Amsterdam in February?

DutchAmsterdam.nl — February is the coldest month throughout the Netherlands. But in Amsterdam, January often is just a bit colder than February. The difference is negligible, though.

The good news is that February is one of the driest months, second only to April which normally sees the smallest amount of rainfall. 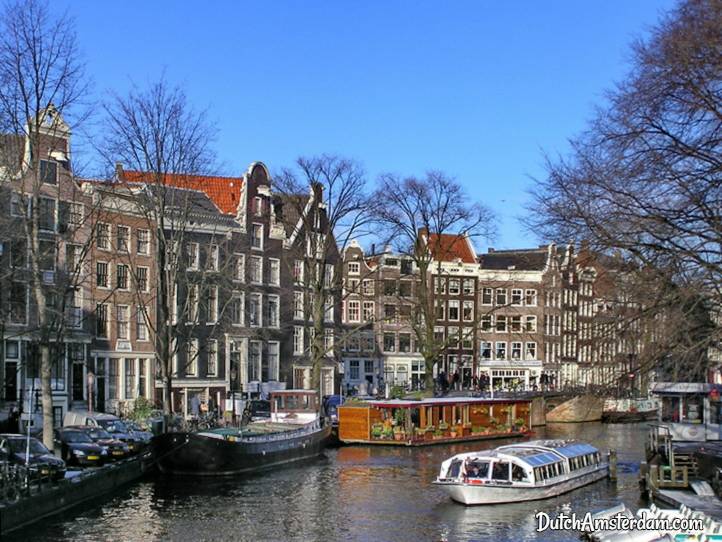 When the trees are bare it’s much easier to see and photograph the beautiful gables, such as here on Prinsengracht

Updated during the month of February
Current

As a service to our visitors we update this page with current weather forecasts throughout the month of February.

At other times during the year the information on the rest of this page will help you understand what kind of weather you can expect.

Even in February, lots of tourists visit Amsterdam. Book museums, excursions and activities ahead of time:

Hotel prices are relatively low during this time of the year. Take advantage by booking your hotel as early as possible.

Seen the weather forecast? Now you’ll understand why we’ve got so many museums (and pubs)

Ice skating on the canals of Amsterdam?

Normally in February the average day-time temperature in Amsterdam is 2.4º Celsius (36.32º Fahrenheit) – but wind and fog (and yes, storm) can make it feel much colder than that.

The nights are very cold, with temperatures usually below freezing. 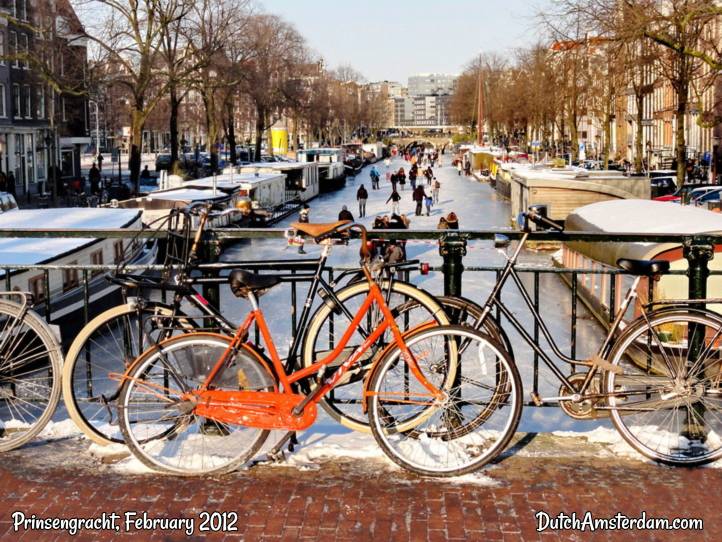 Amsterdam weather in February isn’t quite the same from year to year, though.

In 2012 during the second week of February we had a deep-freeze the likes of which we had not experienced in about ten years. People were ice skating on the canals of Amsterdam (video). (And take a look at wintery Amsterdam as seen from the air).

There’s a lot to see and do in Amsterdam any time of the year.

That’s why tourists visit all year round.

The earlier you look for a hotel, the wider the choice. [View Amsterdam hotels on a map]

The winter of early 2014 was one of the mildest since the Dutch started keeping a record of the weather — in 1706. Mind you, it was still cold, but not nearly as cold as normal. And no, no ice skating on the canals whatsoever.

February 2017 was mild and quite somber, and the ice skates stayed in the closet.

Anyway, on average in February you can expect 78 hours of sunshine in Amsterdam, compared to 51 in January and 42 in December. But don’t make the mistake of thinking sunny days are warm. They’re sunny and cold.

What to wear in Amsterdam in February

When you visit Amsterdam during the month of February bring warm clothes, including long-sleeved sweaters, sweats, and a winter proof coat or jacket.

Thermal underwear is not a luxury. Neither are leggings, warm socks and padded insoles.

Come prepared to dress in layers, because coffee houses, coffeeshops, restaurants, café’s and homes will be cozily warm.

This weather information is provided by Amsterdam native Anton Hein, who is not a meteorologist, and who can not be blamed if your weather experience in Amsterdam is different from what he led you to believe.

Suffice it to say that he knows when to stay indoors with a freshly brewed cup of coffee, some jazz and soul on the radio, and a pot of chili on the stove.

Category: WeatherRelated to: february, WeatherThis article is updated regularly. Last major update: February 23, 2021
Last minor update: Saturday, January 1, 2022 at 11:00 PM, Central European Time (CET)
Transparency:
The DutchAmsterdam website includes affiliate links. That means we get a small commission — at no additional cost to you — for each purchase you make. Your support helps us provide this site free of charge. Naturally, as our Editorial Policy states, our content is never influenced by our advertisers or affiliates.